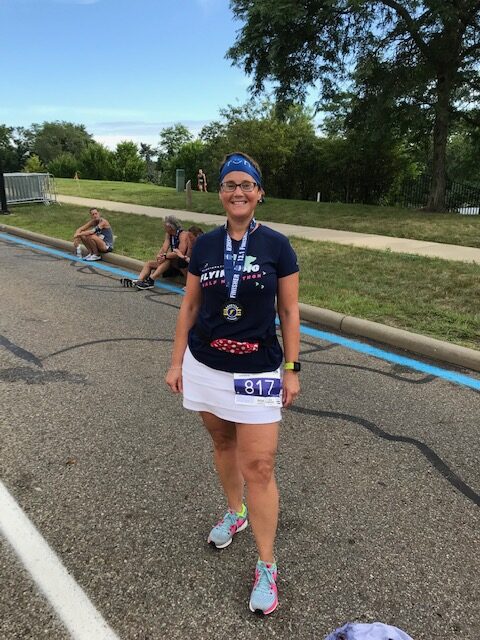 Well #12 turned out to be a great experience! After doing the Flying Pig in May I signed up for this race in order to keep running over the summer. It worked mostly. I definitely ran more during the week throughout the summer, but the long runs pretty much ended at 8 miles. So, going into this race and I wasn’t completely confident.

This was a new half for me – I had run the 10K another year (I forget when), but never this distance. It is a part of the series to benefit for Akron Children’s Hospital. The more known race in the series is the final one – the end of September. I have run that half before and it also happens to be the one and only full I have run.

Anyways, it was a very early morning. We had to be at the race area by 5am so I was up at 3:30am! My GPS got me lost, but I made it and parked by 4:55am. I thought it started at 6am, but turns out it was 6:30am so I had plenty of time to chit chat with folks and use the restroom!

I had a nice conversation with this one woman who I later found out later from someone else’s picture is also in my Challenger group online! Too funny!

It was an absolutely beautiful morning with a breathtaking sky! The temperature was a perfect 63 degrees. It was a nice number of people too – about 850 people. It felt like the perfect number. There was great support along the route with a few bands, fuel stations and even some misters! There was even a couple of kids in front of their house handing out Twizzlers!

I gave myself permission to “walk the ups” if I needed to as I heard it was a hilly route. I actually felt pretty good for most of the race. I walked through the fuel stops and maybe two hills, but other than that I was steady as she goes. I felt like I was on target for pace too. Around mile 10 I came upon the pacer runner for the 2:30 group and I was stunned. So I hung with him throughout the rest of the race. I had a bit of calve cramping towards the end, but gave it my all the last .2 miles. I was really happy with my time of 2:31:06. After looking back over my stats I realized that this time was 6 seconds faster than my first 1/2 in 2011! It is definitely one of the fastest of the twelve!! Feeling pretty good about that now that I’m in my 50’s!!