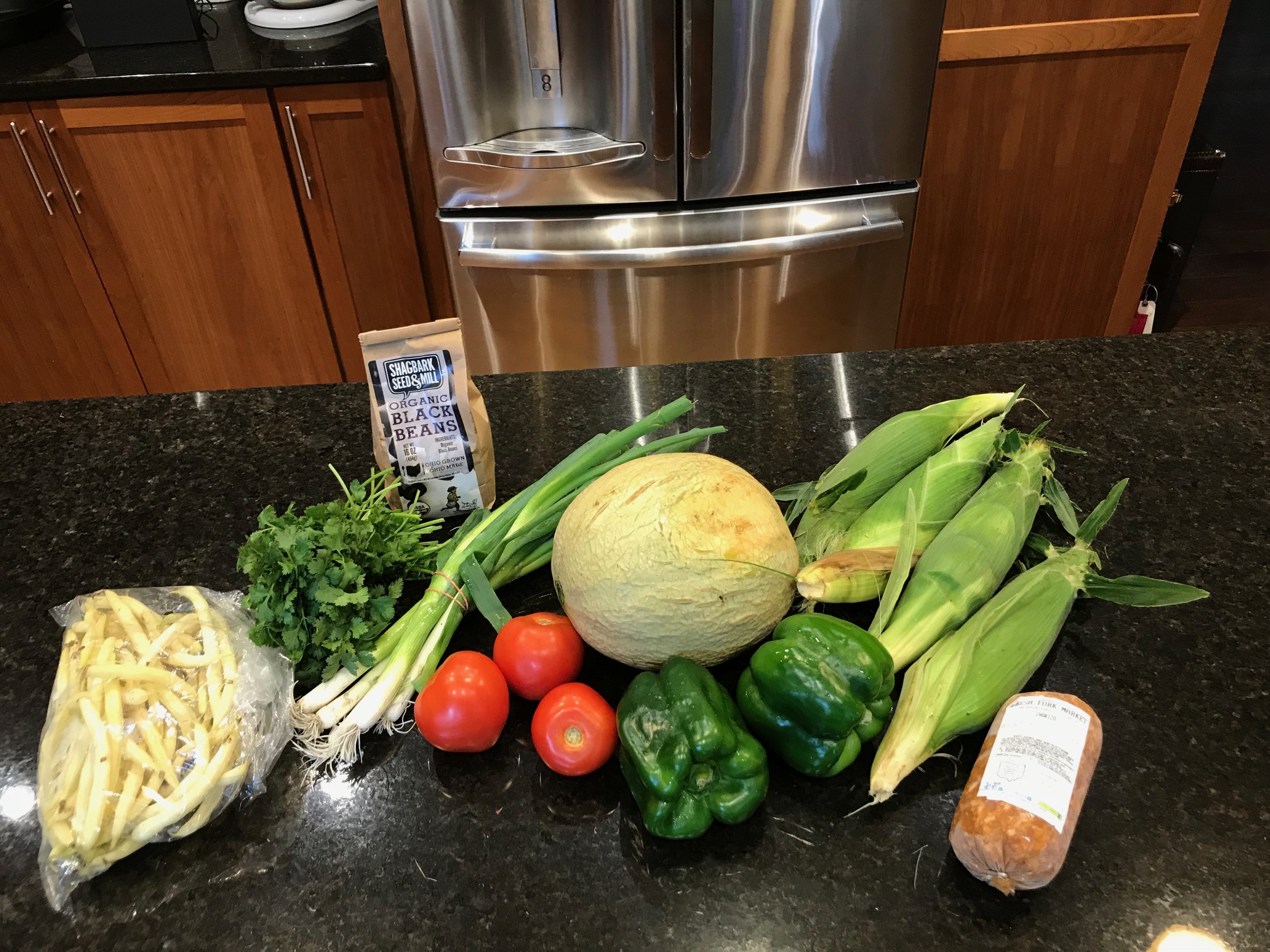 Wow, that week went fast!! Faster than I could eat all the goodies from last week! Looks like I might be freezing some peaches!

Here is the haul from this week’s basket: 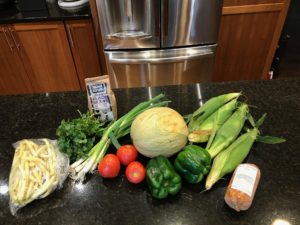 Here is the plan: We will eat the sweet corn tonight with our dinner. I’ll be interested to see if it is any better than the ears from Szalays from this week cause that was pretty yummy! I will be making a salsa with some of the items – onions, tomatoes, black beans and cilantro. I also might try a sweeter salsa with some of the peaches from last week that I need to use up. I will also make a tomato sauce this week and include the green peppers and the chorizo to have on some pasta this week. The cantaloupe will be eaten raw and the yellow wax beans are still a question. Probably will just steam them as a side. 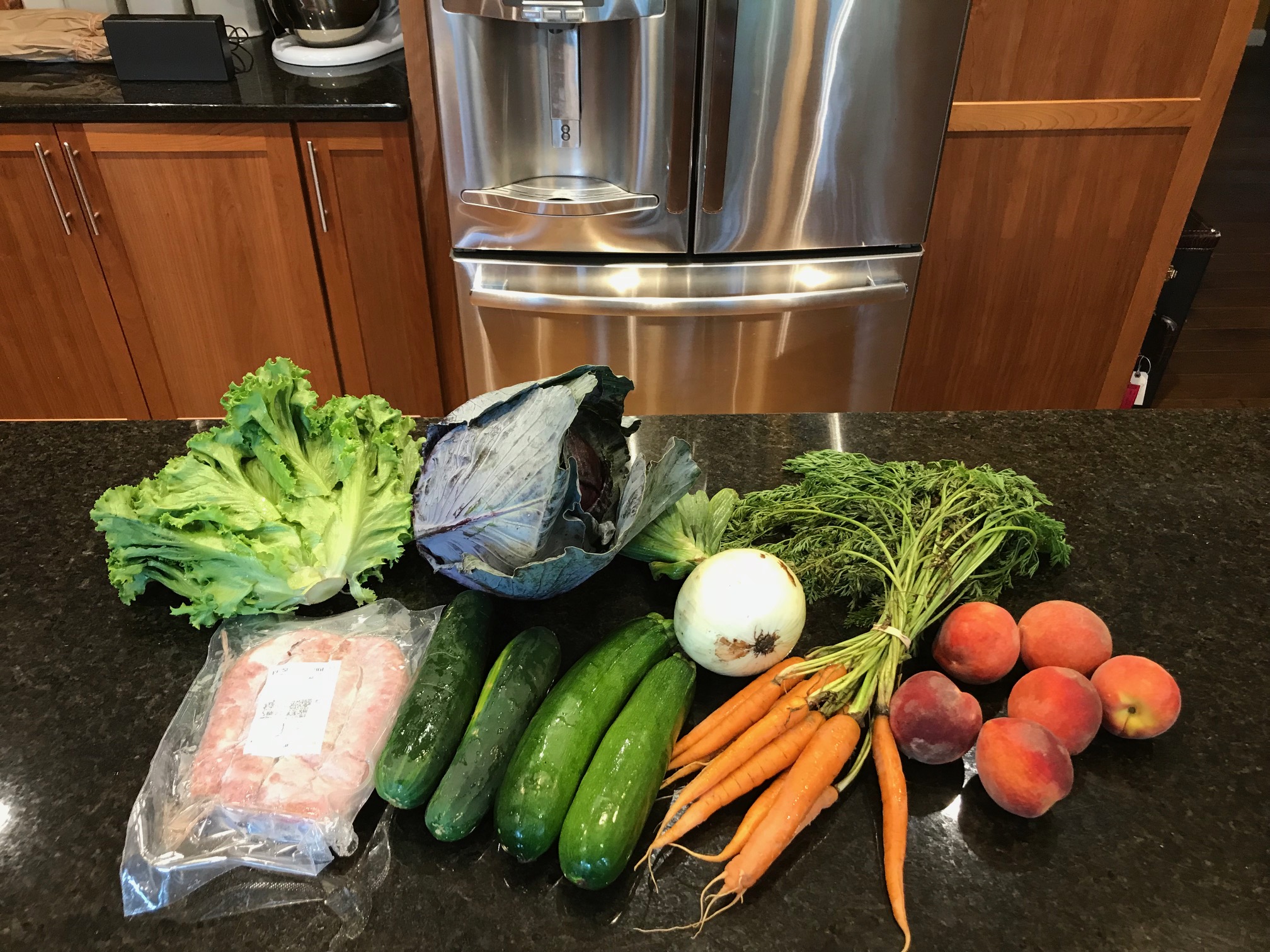 I’m so behind this week, but finally getting to blog about last Friday’s basket!  Here is what we got: 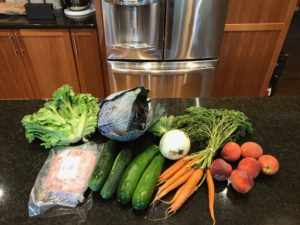 I cut up the carrots and the cucumber to eat as an appetizer for a dinner party on Friday night. We at the green onion brats (which were really Italian sausage) last night with our first Szalays corn of the season – yummy! The onion will be used in a pork and beans dish for tomorrow and the lettuce has/will be used for salad. The peaches will be eaten as is or cooked in a dessert if they get ahead of me. Not sure about the red cabbage, honestly. I need to do some research on that one – again! I might make red cabbage and potato hash tonight!
Happy Eating! 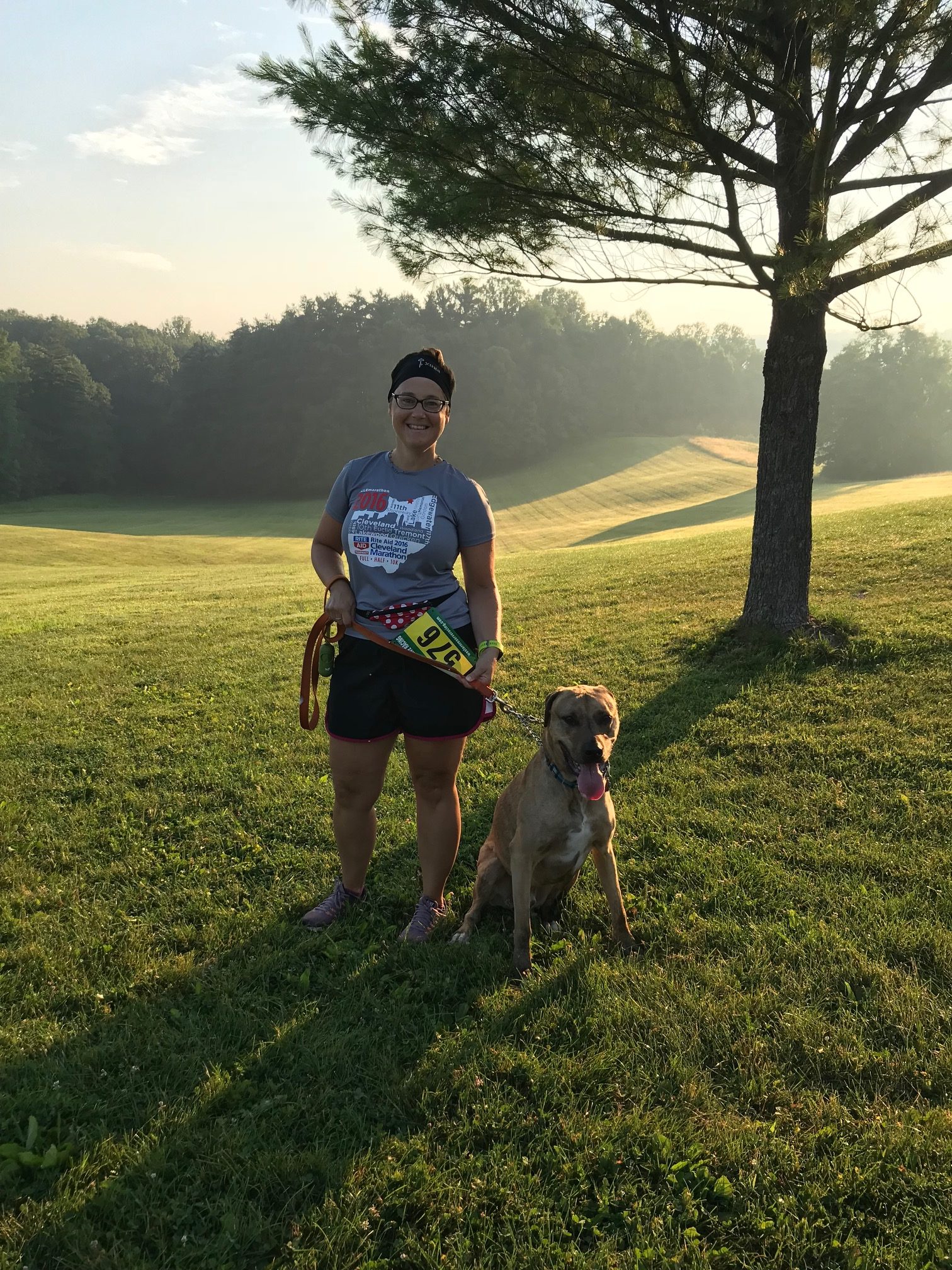 So I tried something different this summer! I signed Henry up for his first trail race! I had been running with him a bit over the summer when I saw an ad on Facebook for the Muddy Paws race series sponsored by Western Reserve Racing. There were 2 different races – a 5 miler and a 10 miler, but what caught my eye was the 2 mile doggie fun run as a fundraiser for the Humane Society. I read further to read that the dogs would be chipped (timed) only and not the humans and there would be prizes for the various sizes of dogs. That was it! I was in!

So the morning of the run Henry was totally cool. No pre-race jitters for him! 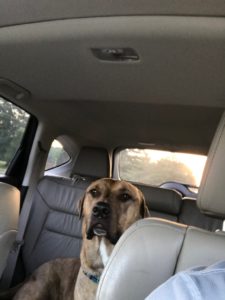 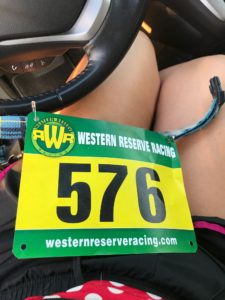 We got there a little bit early to pick up his bib and his swag item – a collapsible water bowl that has the Muddy Paws logo on it.  So stinkin’ cute!  We spent the rest of the 30 minutes before the race making new friends, slobbering other dogs and straightening out leashes!  Before we knew it it was time to start!  The first 100 yards or so was all downhill and even the race director mentioned that he couldn’t wait to see how fast the dogs would pull us down the hill!! There was quite a crowd there – I was pleasantly surprised! I was also surprised at how many smaller dogs there were! I wasn’t sure how the littler dogs would do with a race that distance! 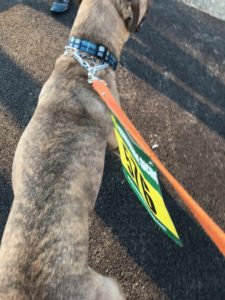 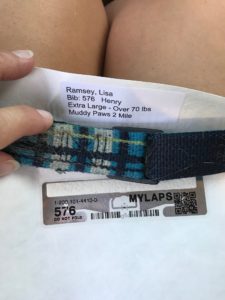 We took off and at first Henry was a bit confused. He wanted to smell the dogs as we were passing them. Pretty soon he got the hang of it as he saw all of them moving in the same direction. He trotted along pretty good. I had made sure to have him take care of business on a quick walk at home that morning before we left to minimize stops. I think he only had to pee once. The trail was pretty steep in parts and the morning was very humid! Because of this I had to walk just a bit on some of the hills. Each time I did as I told him I had to talk just a bit, Henry looked back at me like, “is that all you got, lady? When are we actually going to start running?!” 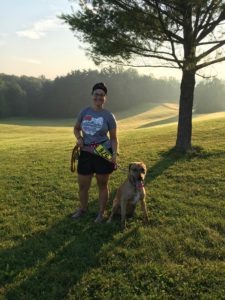 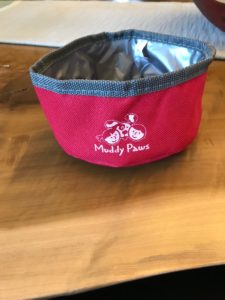 We trotted our way to the finish line and I led him to the number of water bowls out for the doggies. He sniffed all of them, but would not drink out of any of them. It was like they were tainted. First of all, who is he to be judgmental of slobber?! He eyed the water I was drinking so I had to pour some of my bottle out so he could drink it. But as soon as I dumped the rest in a bowl he was not interested. He could not bear to drink out of a public water bowl!  Funny how a muddy lake is another story, however! I was glad I brought his own bowl and a cold water bottle with us so he could have a drink by the car before heading home.

One cool and unique thing about this race was the sounds I heard. Normally during a race I hear feet on the pavement or path and sometimes folks breathing. This time it was a mix of human breathing, but also lots of panting! It was fun and I felt a cool connection with Henry. He is 7 years old and we just started doing this together, but it just shows that it is never too late. We didn’t win any prizes. He/we came in 51 out of 62 dogs in total, but I had a blast and I think I can speak for Henry that he did too. 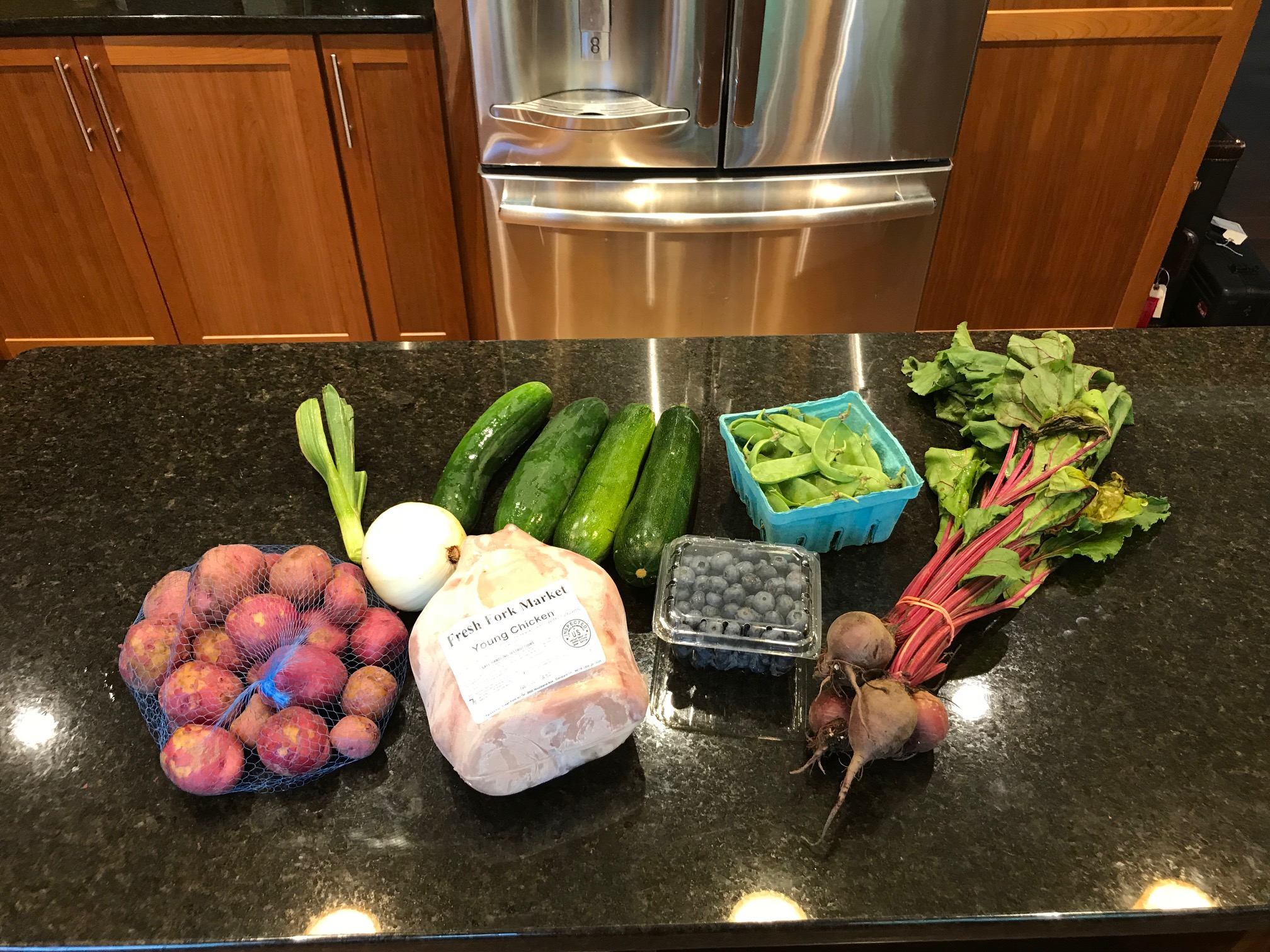 I am a little late posting about this week because we were too busy enjoying my in-laws visit this weekend. The very good news is that we were able to eat a bunch of the basket over the weekend.

Here is the haul: 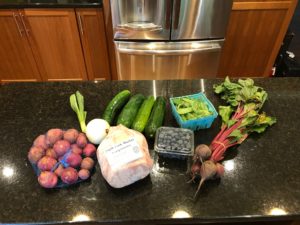 We ate the red potatoes with 2 different dinners over the weekend roasted with a candy onion. By the way, roasting veggies in general are amazing!! I don’t know why I don’t do it more often! The onions were really sweet and yummy. We roasted some zucchini also with a little bit of salt and pepper, and Parmesan cheese on it. Next time I think I want to broil them a little bit more to get them a bit crispier. We roasted the beets for a salad to go with dinner last night and they were yummy too. It was an experiment as both Shirley, my mother-in-law and I had never done it before. However, I realized that beets shrink down a lot and I should not cut them as small next time. Other than that they turned out great! We made the chicken on the Traeger grill last night and it was very good! We will eat the rest of the items raw. 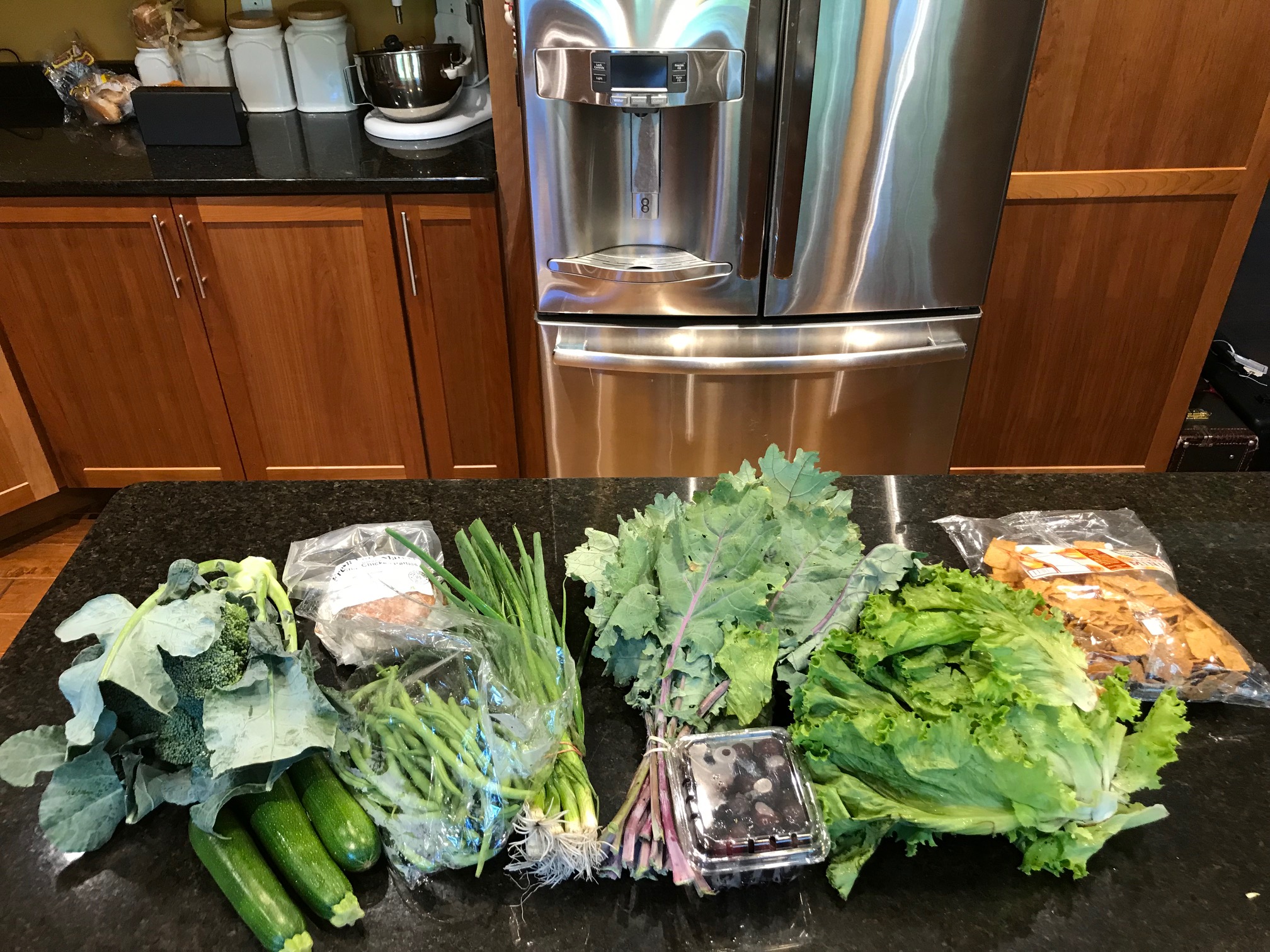 Here is our haul from this week: 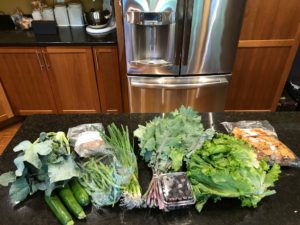 We will eat the broccoli and green beans as sides. I am making a yummy snack (think smoothie bowl) with the cherries using almond milk for a treat for tomorrow. I will use the green onions, some zucchini and some other veggies I need to use up in a stir fry for lunch today. I will use the kale in a soup this week as well as for a new twist on avocado toast because I’m a little bit obsessed. The lettuce will be for salads and the chicken patties we will make for jerk chicken sammy’s for tomorrow’s dinner. Also on deck today is a blueberry peach cobbler that is from skinnytaste.com so it is totally a healthier option.