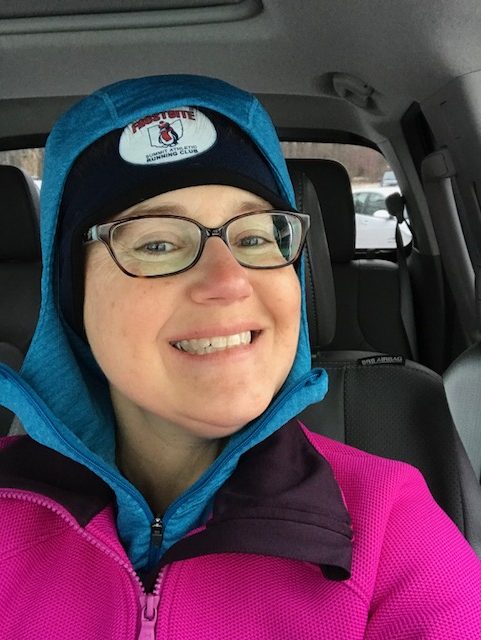 First race of 2018! I love this race! This is my fourth year running it and it gives a fun twist to a race. The way it works is that you predict your finish time when you register and then the 10 folks who come the closest to their predicted times are the winners! It doesn’t matter how fast you are! No watches or timing devices are allowed – on your honor. This is the only race in which runners like me could actually place! In the past three years I have not really come close to my time. The winners usually are within seconds of their predicted time which is crazy!! The other cool thing about this race is that there is a big pile of freebie clothes on a table and at the end of the race people can grab something from the pile. Basically everyone leaves with something so it is fun. 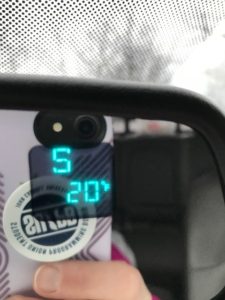 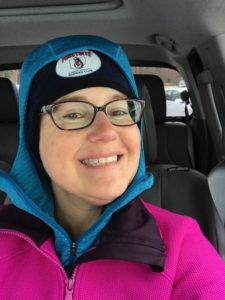 It was chilly this year at the start of the race – 20 degrees! I had predicted 35:15 when I registered, but I changed it to 34 minutes flat the morning of the race because of how I’d been running on the treadmill lately. The roads were a little snow covered, but not much. I have not run outside much this season because of very cold temps so I wasn’t totally sure about how I would do.

I felt pretty good the entire race. There was one slippery spot that I noticed on the loop that we ran twice, but other than that it was uneventful. I also walked a little bit up one of the hills.

As I came into the finish I felt like I was close to my time. I looked back at the clock (they don’t have it facing the runners for obvious reasons) and it said 34:01! Oh, my gosh! “I won!”, I screamed to the woman next to me. I told her what my predicted time was and she said, “oh, yeah, you got really close!”. So cool!! Of course this is the year that I placed. I could not stay to hear the results as my family had an appointment that morning so I had to get home. AHHHH!! I chatted my friend who ran the race to see if he could pick up my gift card, but he had already left! I found the race director to find out if I could still receive my prize if I was not present and he said yes. He also let me take something off the freebie table before I left which was nice. Of course it wasn’t confirmed that I had made the top 10 when I left as not all the runners were back yet so I left not knowing for sure if I made it.

I kept checking the results that morning, but they were not posted. Then my friend texted me to let me know that I came in 5th!!! Yahoo!!!!  I had predicted 34 minutes flat and my finish time was 33:56!  I was 4 seconds off my predicted time!!  Here are the final results with my name listed. I will admit that while I was excited that I actually placed in this race, I was disappointed that I wasn’t there to hear my name called and get some applause. I’m not ashamed to admit it! Runners like me don’t usually get the chance to “place” in races. I called Ritches Sporting Goods to give them my mailing address so they could mail the $10 gift card to me. Of course I also have bragging rights!! But you better believe that I will make plans to stay to hear the results at next year’s race. That will inevitably ensure that I will be at least a minute off my predicted time!! Ha!!!