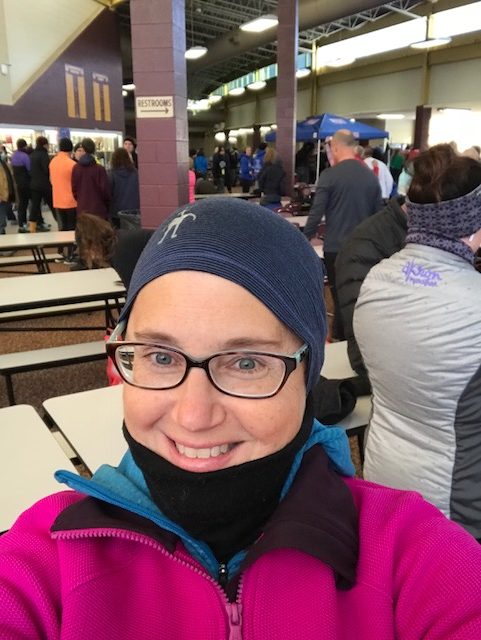 Whew, that was a cold one!  It was a balmy 15 degrees at 4pm for the start of this 5K.  I think this is the race I have run the longest!  I started in 2010 and have run it every year.  It is fun because it is the last race of the year and you just never know what the weather will be!  For example, last year it was 40 degrees! 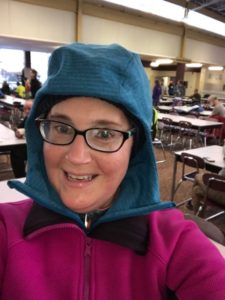 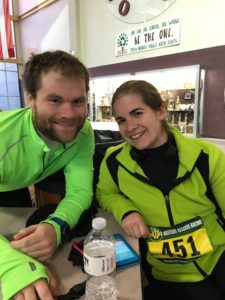 I was actually dressed perfectly for the weather today.  I had on running pants, two layers of tech shirts (one was my new Patagonia shirt with a hood – should be great for fall weather) and then my running jacket.  I had 2 pairs of gloves – one pair of liners, my gaiter and 2 hats.  I took one pair of gloves off at about 1.5 miles.  I felt pretty good for the entire race – but walked the last hill which is a killer.  My glasses fogged up again which is generally a pain, but more this year because I was trying to avoid the slush.  We got a decent amount of snow the day before and a little bit the morning of the race so the roads were a little slick in parts. 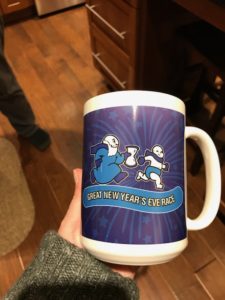 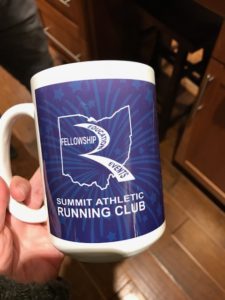 Overall I was okay with my time.  I’m definitely slowing down a bit, but hey, I’m still out there, right?!  That wraps up both my Christmas traditions and my races for 2017.  Happy New Year!  Bring on 2018!! 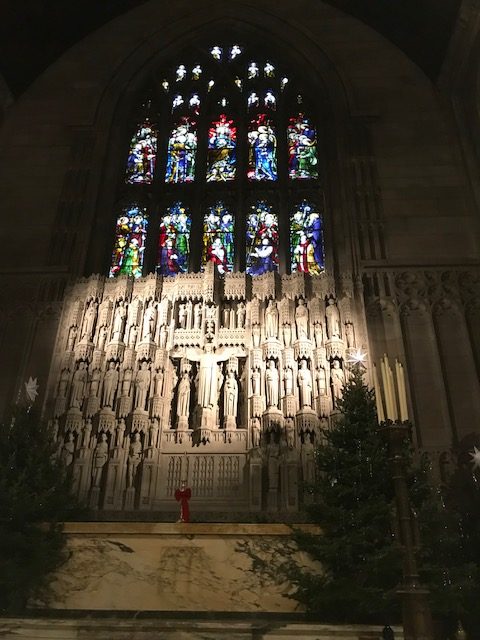 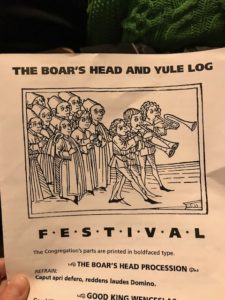 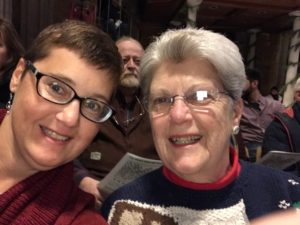 Now this was fun!  My friend, Marilyn had mentioned this festival to us for a couple of years, but we never were able to get it together to go until this year!  I wasn’t sure what to expect, but I was intrigued by the video on Trinity Cathedral’s website.  Read more about the festival and its history here.  There were two times offered for the festival – 3pm and 5:30pm.  My mom and I ventured out for the 3pm.  We got there about an hour early to get a good parking spot so we took a look around the building commons and even stopped in at the adjacent coffee shop in the basement.  Around 2:30pm we headed upstairs to find seats and I’m glad we did because it was packed!!! 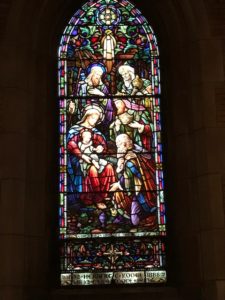 My mom was blown away by the church sanctuary.  She kept saying, “I feel like I’m in Europe!” I had been to the cathedral a couple of other times before, but the beauty of this place is breathtaking.  The organ was playing prelude music when we arrived which was totally awesome and loud.  I kept looking for the trumpets, but it turns out that the trumpet sound was  just a stop on the organ for trumpets.  I was totally fooled as they sounded like the real deal!  We just soaked it all in…the place, the music, the crowd, the windows, the energy.  It just felt like magic or the Holy Spirit…or both was all around us. 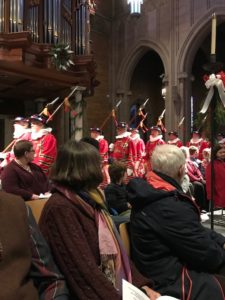 Soon the procession began with the marchers (don’t know the actual name) in red.  After they were in the their places around the church the dean/priest of the church gave a welcome and an overview about what was going to happen.  He emphasized that the congregation was not to be merely spectators in this festival,but played an active role with singing parts throughout the event.  Yay!  My kind of thing!

Here is an excerpt from the program explaining better than I can:

“Borne by a sprite into the darkened church, a burning candle symbolizes the coming of Jesus into the world.  The light is given to the Church and remains on the altar beneath His figure.  Then, announced by the fanfare of a trumpet, a noble company of knights and attendants enter in processing bearing the Boar’s Head.  Rooted deep in pagan times when the boar was the first dish served at a Roman feast, the colorful ceremony of the Boar’s Head became a part of the Christmas celebration in the great manor houses of the Middle Ages.  The Church endowed the custom with symbolic meaning and transformed it tot he worship of God.  The ceremony of the Lord of the Manor became a service of praise tot he Lord of the universe.  Ancient ceremonies associated with the winter solstice were combined with Christian traditions associated with the birth of Jesus.” 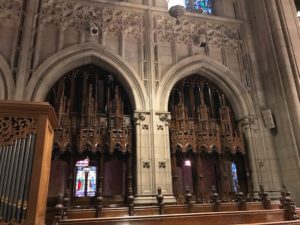 Although no one knows exactly who first planned it, the Boar’s Head procession was in use at Queen’s College, Oxford shortly after its founding in 1340 and continues today.  Trinity Cathedral celebrates the 55th year in 2017 and what a place to have it!  As we enjoyed the procession and the spectacle of this event, the familiar Christmas carols took on a new and deeper meaning.

The pictures shared in this post don’t do it justice.  You have to come to see and experience it for yourself.  I want to close with the final line in the program because it is said perfectly.  “Let the music, color, aromas, costumes and drama of this ceremony strengthen our resolve that we have the power to light a candle rather than to curse the darkness.”   So true, so true! 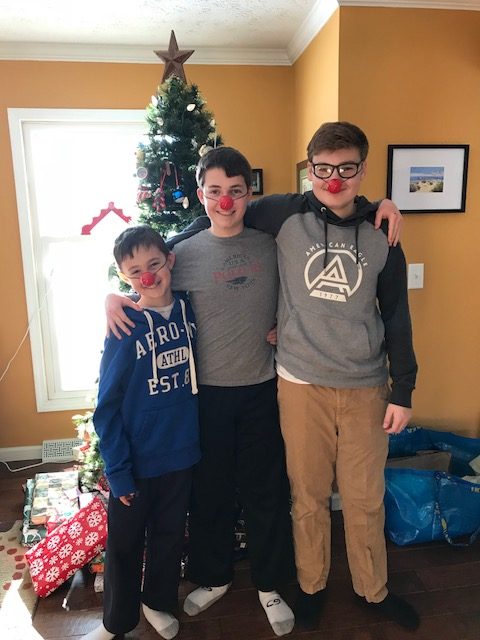 Each year we get to extend our Christmas celebration with my sister, hubby and nephews.  They usually come to Hudson sometime during Christmas week and I usually host.  Timehop reminded me that a for a couple years when the boys were little and the weather cooperated we went sledding.  That was fun!  This year we simply visited, enjoyed some champagne punch, ate dinner, and exchanged presents.

We also did the “white elephant” gift game tradition in honor of our family friends, the Kittelsons.  For many, many years, the Kittelson family would host our families on Christmas day and we would do the white elephant gift exchange.  This is the game in which people bring a gift that is laying around their house (not bought), wrap it up and bring it to exchange.

This time we took turns selecting gifts based on birthdays.  Then once everyone has a gift people have a chance to steal/trade gifts if they roll doubles with dice.  You never know what you are going to get!  It is always fun!  Since the Kittelsons moved to Minnesota this summer we couldn’t get together with them so we had to do the white elephant with our family. 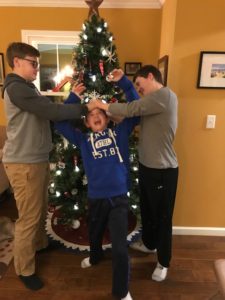 Our Christmas with the Barkers always feels too short, but I’m thankful that we get to see each other!