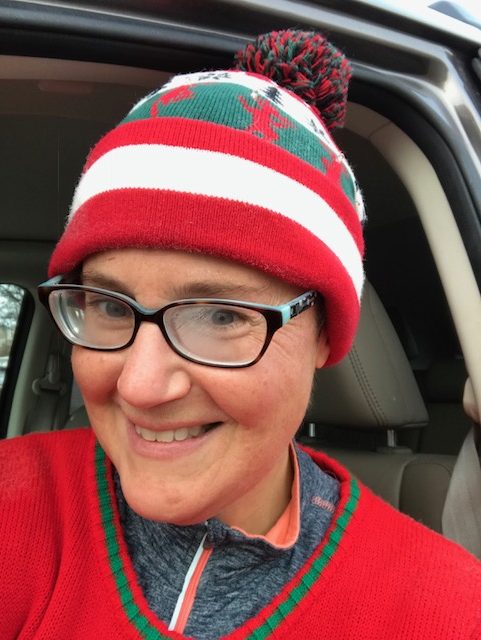 This is the second year I’ve done this race sponsored by Western Reserve Racing.  It is really nice because it is right downtown Hudson so I don’t have to travel far.  This year the weather was 28 degrees and cloudy.  We had gotten a dusting of snow the day before so it looked pretty and Christmasy, but the roads were clear.  I was determined to to win the ugly sweater contest this year.  Here I am in my new blinking sweater.  Yes, it is making a encore appearance from the zamboni ride.  I also remembered to wear my blinking hat that I got last year.  Add some Christmas socks, a tutu that I may or may not have bought at the children’s department at Target years ago and you have an outfit!  I had to bust all this out since we missed the jingle bell run this year! 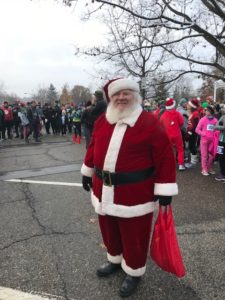 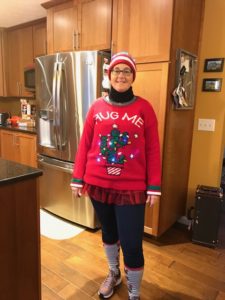 There were over 700 runners participating this year.  I eagerly lined up for the ugly sweater contest, but had a lot of competitors.  Even Santa showed up!  It turns out that my sweater actually would have won the “cutest Christmas sweater” contest as the runner-ups and winners were truly bad.  One funny thing happened on my way to the race.  No seriously.  A complete stranger offered to give me a hug.  Of course at first I forgot that my sweater had “hug me” on it so I gave him a weird look until he reminded me that my sweater said “hug me”.  Duh. 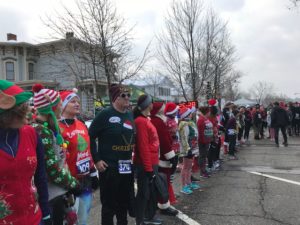 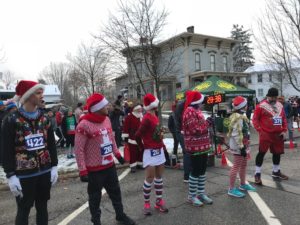 I ran into a few people I knew so that was fun.  The run itself was uneventful.  I was too hot with 3 layers on.  I took my gator and gloves off after mile 1.  I felt challenged running this morning.  I haven’t run outside for awhile and when I run the treadmill I usually don’t set an incline so I wasn’t really prepared for the hills.  I could totally tell this during this race!  I walked a bit during it.  I was about 3 minutes slower than last year, but it was just fun to get out there. 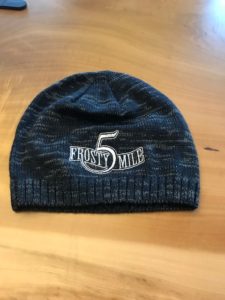 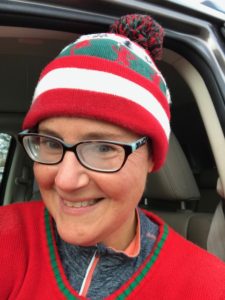