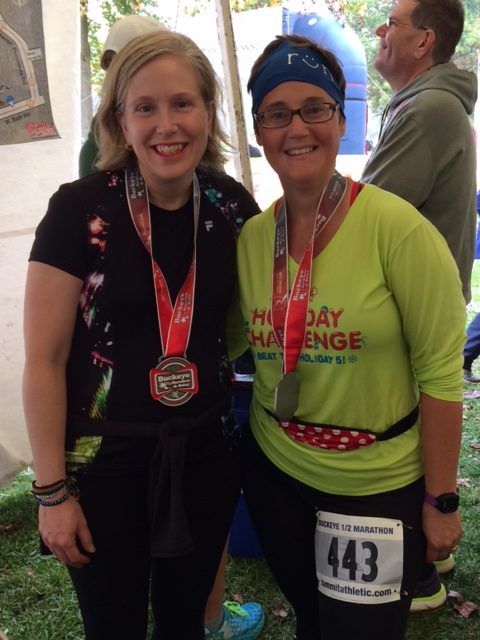 It was a great morning for a race today! Originally we thought it was going to be really chilly in the morning (like low 40’s and rain), but then we checked in the morning and it was 57 degrees with no prediction of rain until like after 11am! My good running buddy, MaryAnn and I signed up to do this race together so I was looking forward to running it with her! She stayed at our house last night so she wouldn’t have to drive so early this morning and since the race was in my neck of the woods. 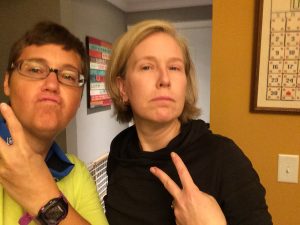 This was a comeback of sorts for both of us. MaryAnn was getting over lots of months not running due to injury and this was my first race after getting the bionic eye in May. We were determined to make this race about fun…and that’s what we did! 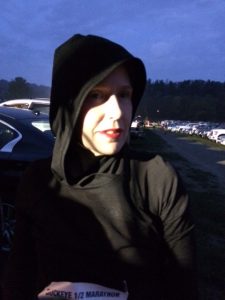 And here we are ready to go! 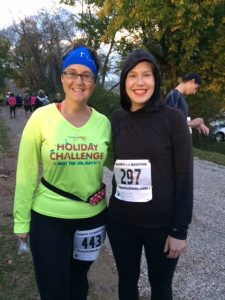 We’re not sure what this is. We also don’t know why we were saying loudly looking at the race map, “Wow, I thought this was a 5K!!” We are special… 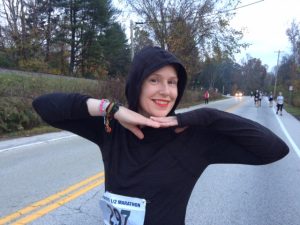 The beginning of the race was really fun. Of course I started out too fast, but we made a forest ranger friend who was wearing cool trail shoes and we started talking to her. Before long we were almost at the half-way point. This race is a double loop (kill me), with a couple decent hills – okay really just one killer hill. After a quick potty stop for MA we were through the half and onward, on. Passing all of the relay runners at the half way point I was so wishing I was doing that this year instead, like last year! Right around mile 7 or 8 is where my wheels started to fall off and I started telling MaryAnn to go on ahead without me. Reassuring me that “I wasn’t the boss of her” she stayed with me. One awesome highlight was when MaryAnn was jumping trying to grab one of the giant leaves blowing all around us! It was pretty funny and she actually got one!! I walked a but for the most part kept going (see explanation later about things NOT to do training for a half marathon). I ate my GU (half) early at about mile 8, but it didn’t give me the jolt I needed/expected. We kept catching up to our new friend so that was fun. I was kinda done after mile 10. My hips and feet hurt and I just overall felt sick. At that point I tried telling myself, “okay, just a lunch run left” and that worked…for like 1/2 mile. We managed to pull our arses to the finish line finally and I was just really sore and just ugh. 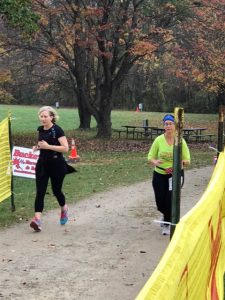 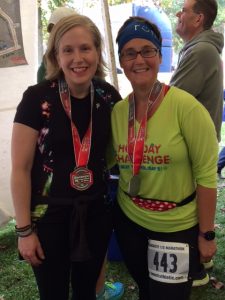 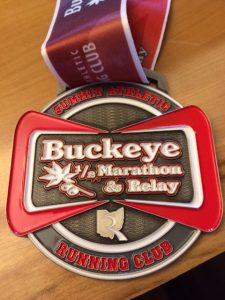 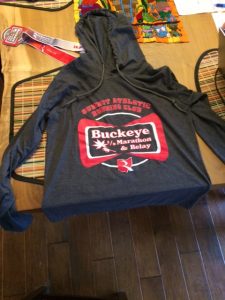 And now it is time for Lisa’s lessons from the race: things NOT to do when training for a marathon:
1. Blow off the training after mile 9. So this wasn’t totally my fault, but after my 9 mile run I never ran other one longer than that. I got a migraine on the day I was supposed to run 11 and then it was too late. I still get anxiety about running anything longer than like 6 so that impacts my motivation and training too.

3. Eat a Mexican-inspired dinner the night before. Yeah. For some irrational reason I thought I would purchase an Enchilada Bake from Costco to have for dinner last night. Not the normal pasta dinner that I have had before probably every other big race I’ve ever done, but an Enchilada Bake that I’ve never had before. Do I have to really explain this? Let’s just say that my normal digestion pattern the morning of a race was doubled with no Imodium to be found in the house. Seriously. Why did I make this disastrous food choice? This isn’t my first rodeo!!!

4. Wear clothes that are too warm for the weather. Again, rookie mistake. So, I really would have been fine and much more comfortable in shorts and a short-sleeved shirt, but I choked when picking out my clothes this morning because I thought the weather was going to be cooler. So I was pretty much overly warm the entire time.

5. Wear glasses. Okay, so this one is related to #4. Because I was so warm my glasses kept fogging up, like badly and because I was so sweaty I didn’t have a way to wipe them. I don’t have contacts again yet so I’ve been running with glasses all summer, but they haven’t really been a problem – until today!

So those are the 5 Dont’s from this race that I recommend NOT doing training for your next half. What do I recommend then? Run with a good friend. MaryAnn was so sweet, understanding, goofy, and supportive today that it made running together trump (oh, sorry) all of the race flubs.

I’m not totally sure of our official time yet. My Garmin read 2:35, but it started tracking at .40 miles in so I’m guessing more like 2:40. Our times will probably read longer because it will include our potty break time and my watch paused then. Not like any of this matters anyways, but you know me – all about the numbers. Suffice it to say that no PR’s were made today!

Now I’m just enjoying the after effects of a good long run with one of the best people I know!! Oh yeah, and looking forward to the glass(es) of red wine in my future!