Well, that was one way to celebrate a birthday!! What a crazy, but awesome race! What a good story, however! 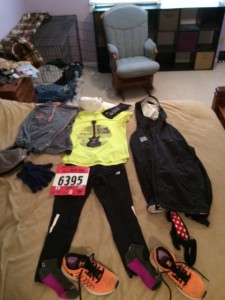 The morning started out a bit rough at home. We got a little bit of a late start getting on the road and by the time we got downtown our “regular” parking lot was already closed (ugh). Oh, and it had already started raining in Cleveland. At that point I actually thought about just bagging it and going to breakfast! I had not trained like I wanted to (only got to 9 miles and that was a split run 5/4) and my stomach was in knots because I was nervous about not being prepared, the weather and then the parking situation. Thankfully cooler heads prevailed and we got a spot kinda close to the start. I mean, come on, this was the 5th anniversary of my first half – on the same day, my birthday! This race had to happen!!!

Waiting for the start! 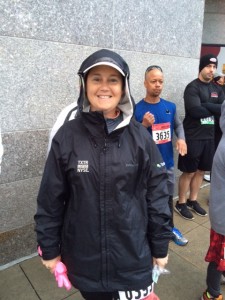 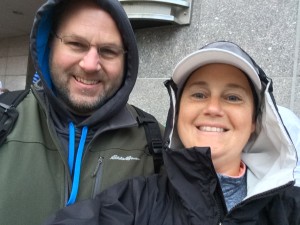 Thankfully the rain had stopped by the time the race started. I had high hopes that the worst was over and that we would just have to face the wind, chilly temps and some puddles. Ha! I was wearing pants, a short sleeved tech shirt, a long sleeved tech shirt and Mike’s waterproof/windproof Patagonia jacket (life saver!!). I also had on an ear warmer, ball cap, gloves, and trusty jacket hood. It turns out this wardrobe choice was pretty much perfect. 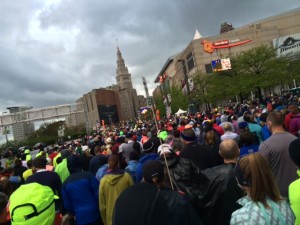 The first few miles were uneventful. I was feeling good, getting a bit hot and opened up the vents of my jacket (very cool feature). I considered taking my jacket off and decided to wait until the 6 mile mark. I’m glad I waited. Between mile 4 and 6 it snowed small white, round pellets – not flakes, but not sleet either – and I kept hearing people without hats say, “ouch!”. It was pretty funny as everyone was commenting on how crazy the weather was. Nothing was really accumulating at that point. It was just enough to be annoying, but agreed with a fellow runner that it was better than rain! True!

I snapped a couple of pics when the snow pellets were really coming down (of course the pics don’t really show it!) 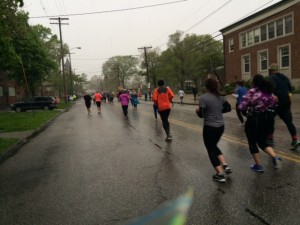 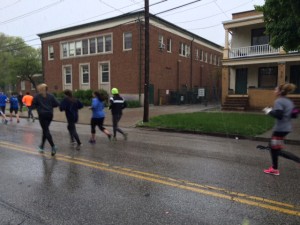 Then between miles 6 and maybe 8 or 9 it snowed and rained on and off. At one point there was sun, but never enough for me to be able to take the coat off. I ran strong the entire time, which was really surprising to me because of my lack luster training, but I was happy I at least felt good because the weather was enough of a challenge. I grabbed water or Gatorade at all the stops, but other than that did not really walk. I took a GU packet right after mile 9 and that was enough to push me through.

I was really happy to see Kate, a friend from work at around the 10 mile mark. At that point it was precipitating pretty steadily (snow/rain mix??) and I thought I heard her voice cheering on the runners. I turned around and yelled her name and she came running out to the street to hug me. It was a moment. It actually was a great point of encouragement for me. I just kept thinking, just a 5K to go!!

Finally we hit Lakeside and I saw the 12 mile marker. At that point the white snow/hail pellets were coming down in a vengeance and it was just all white across the lake and it started accumulating on the road. All of a sudden there was this big flash and then this huge clap of thunder!!! Whattttttt!!!! Yes, thundersnow!!! I was a little freaked out, but excited at the same time. This thundersnow episode (it was just one time) pushed me forward. I had to hold onto my hood so it would block the snow pellets from hitting my face. Okay, so I’ll admit it, it was sorta fun!!! There were some runners around me that were walking, but I was like, “oh, hell, no, I want to get this done!” I pushed it through to the finish line and passed a couple people coming into the gate. I was surprised that I had some energy left in the tank. I felt really proud and kinda bad ass for finishing in those conditions!!! My feet were completely soaked and I was just wet all over. I had managed to avoid puddles the first half of the run, but it was useless the second half. The jacket worked, but by that point I was just wet/sweaty. As I got my medal I almost burst into tears, but I kept it together. I saw Mike as a grabbed my frozen banana, chocolate milk and snow covered bag of pretzels and such. I had no idea what my time was – I hadn’t really looked at my watch the entire race, which was actually kinda nice. 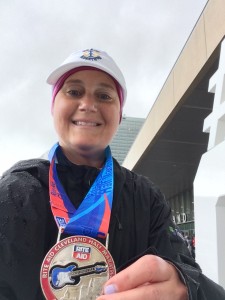 We managed to snap these couple quick pictures before making the long haul to the truck. Remember how we had to just grab a parking spot? Well, it was closer to the start line and pretty far from the finish!! We walked for about a half hour (felt like way longer) to the truck. Walking to the truck, soaked, stiff and chilly was probably the worst part of the race experience!! Let me tell you, a hot shower has never felt so good! Huge props to my husband, Mike, for being my roady and such a huge supporter!! 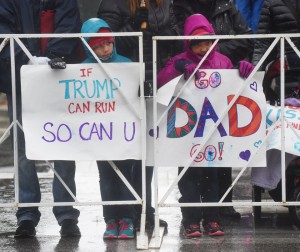 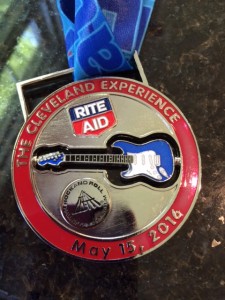 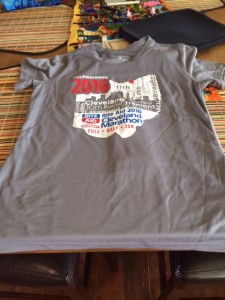 I bought new medal hanger from the Expo. My other one got filled up! 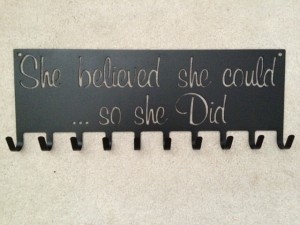 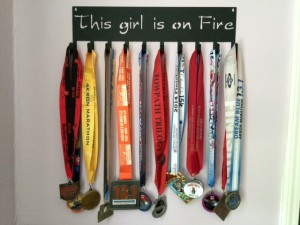 It was so great to see Coach Jenny at the Expo this year!! 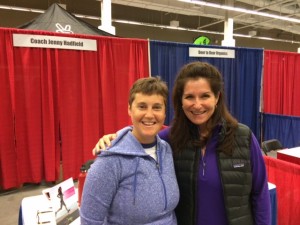 I’m so luck to have Coach Jenny and all of the Challengers as part of my online running community. They are the best!

I was pretty happy with my time, especially with the conditions. Of my 8 half marathons that I have run, there were 4 that were faster and 3 that were slower. I’ll take that! Oh, and plus, age 47 never felt better!!!!!