Well, the first entry for the soup blog has arrived and as I sat down to write it, I realized I did not take any pictures! Ugh. Okay, note to self to do that for next time! I was too busy cooking, I guess!

Some background on this idea. I have been blogging about our Fresh Fork co-op that we participated in all summer long, but it just came to an end. I was brainstorming what to blog about next in terms of food stuff and I thought about committing to making a different soup every weekend and blogging about that. I want to keep it simple because let’s face it, I don’t have time for complicated! So, without further ado, here goes the first entry!

I actually made two soups this weekend:

Butternut Squash Soup – This is one of my faves! I’ve made it a bunch of times with this same recipe. I love the creaminess of it and today it was especially onion-y because I used 2 large leeks instead of 1 1/2. No one else likes this soup at my house so I have to make some to freeze, but it freezes well.
Here is the recipe:
1 butternut squash (about 3 lbs)
3 slender or 1 1/2 larger leeks, white parts only, split lengthwise, washed and cut into 1-inch pieces
3 cups whole milk
3 cups water (I use chicken broth instead)
Salt and pepper to taste

1. Peel the squash. Remove the seed and string, then cut it into 1-2 inch chunks. Toss into a large soup pot. It also says “or dutch oven”, but I’m not quite sure what that is. Add the leeks, milk and water; salt generously and bring to a boil. Lower heat to simmer and cook 25-35 minutes until squash is soft enough to mash when pressed lightly with the back of a spoon.

2. Using a blender or food processor, (I actually use my hand blender which works the best and is a lot less mess than the blender!), puree the soup in batches until it is very smooth. It may be thick. Thin to your desired consistency with milk or water. Season to taste with salt and pepper and nutmeg. Reheat if necessary. This soup is best when truly hot.

Serves 6: Per serving: 180 calories, 32 carbs, 6g protein, 10 mg cholesterol, 7g fiber, 4.5g fat.
Ratings: Since the fam does not like this (let the record show that they won’t even try it, I have no ratings from them. However, I love it and would give it a 5/5 on the soup ratings scale.

Potato Cheese Soup
I made this for the first time tonight and it was really yummy! It took about 1 1/2 hours so it is more of a weekend meal, but still really simple to make.

1. In a large saucepan, bring potatoes, carrots, celery, onion, and vegetable broth and salt to a boil. Reduce heat; cover and simmer until potatoes are just tender. Do not rinse; mash mixture slightly. Stir in milk.
2. In a small mixing bowl blend butter, flour and parsley and pepper; stir into potato mixture. Cook and stir over medium heat until thickened and bubbly.
3. Remove from heat; add cheese and stir until cheese is almost melted. Let soup stand for 5 minutes.

Ratings: Yummy all the way around! Mike described it as a loaded baked potato without the bacon bits. He said next time to add both bacon and maybe chives. It was nice and thick, but with a good flavor. We did have to add more salt before eating. We served it with some crusty French bread.

Well, we have come to the last week of the summer share for our first subscription to Fresh Fork! It has gone fast! Here is what my husband picked up while I was out of town. Notice, the great picture! 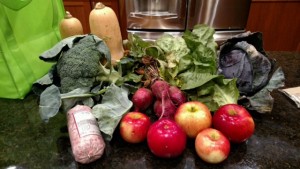 I plan to make some butternut squash soup this week as well as try to use up the other veggies in a stir fry. We might use the sausage on a pizza. I must confess that I need to do a good fridge and pantry clean-out in order to plan for this week. Being out of town all weekend means that I feel a bit behind, but I’m off today in order to get caught up with stuff like laundry, bills and menu planning. I’m glad that I we don’t have any weekend travel plans for the near future, probably through the holidays. It will feel good to settle into time at home. It has been fun to share our first fresh fork experience with you all. I hope you have enjoyed it! See you again to share this next June! Until then, Happy Eating. And, look for a soup blog over the winter months, hopefully starting this weekend!