Race #2 complete! I “survived” the run, but almost didn’t survive waiting for the results!

It was a pleasant day to start – sunny, with little wind. I had to get to the race early to pick up my packet on race day as I was working the night before when regular packet pick-up was scheduled. I worked a late event at work so I didn’t get into bed until 1am, but I felt pretty good at 6:30am anyways.

I’m glad I got there early because parking was a little crowded. The parking lot was also a sheet of ice which did not bode well for the race route! It was all on the road which I noticed was snow/ice covered when I drove in…hmm.

I ran into a former JCU student leader and her boyfriend at the start which was fun since I was on my own. This was a prediction run so the top 10 people who ran a time closest to their prediction time won prizes. The tricky thing about this race was that you had to predict your time when you registered rather than the day of the race so it was hard to take the weather into account (unless you were supposed to predict too!). I had guessed 33:30 for me knowing it would be on the road rather than a trail. I usually run about between 31 and 32, but that is for an even 3 miles.

The trail was a double loop with a pretty good hill and lots of ice. Everyone just tried to stay on the snow packed areas. Then one section of it was tough because it was just un-plowed snow that was turning into “sand” the more people went over it. I do like the winter races because you just don’t know what you are going to get!

I finished with an unofficial time of about 35 minutes. I glanced back at the clock quickly after I crossed the finish line. So, I was off my predicted time by about 90 seconds or so. Not too shabby! 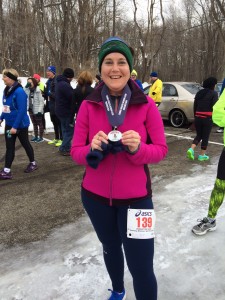 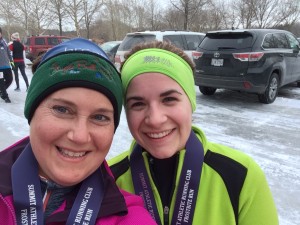 Here is the shelter where they were sharing the results/prizes. Notice – not enclosed! It did not take long for my sweat to begin turning me into a big Popsicle! I will say that they did provide awesome goodie bags, however. They were loaded with a cup, lid and hot chocolate mix, peanut butter crackers, mini chocolate doughnuts, and a breakfast bar! I just wanted water. I was too cold to monkey around with making the hot chocolate! 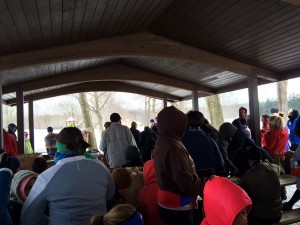 We waited for quite awhile and then the race volunteers told us that the last runners had just crossed the finish and we would be getting results soon. It felt like forever! I kept trying to decide if I wanted to go to my car to get my blanket or not. It wasn’t too far to my car, but far enough! Plus I didn’t want to miss the results! Finally, I couldn’t take it anymore and I went to fetch my blanket. Much better even over my wet clothes! 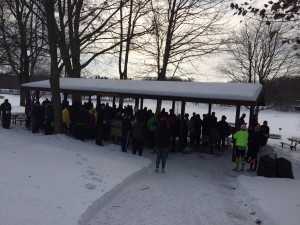 Waiting…but with a blanket! 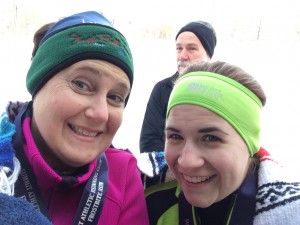 They finally got the results after some computer glitches and the top 10 people were all within like 30 seconds of their predicted time! Wow! Maybe I’ll get better if I keep doing this?! Then after the official prize giveaways they let the group loose on the prize table and everyone went away with something. I scored a long-sleeved green tech shirt, in my size and everything…sweet!

All in all it was a fun race and now I’m officially a member of the SARC! They seem like a really great organization. They do some really neat things in the community that I may look into getting more involved with – volunteering at races, group training runs, etc. Runners (and friends) are cool.

Pictures of the SWAG from the race. We got the cute scarves with our bib and the green shirt was my freebie! And a MEDAL! FOR A 5K! FIRST TIME THAT HAPPENED!!! 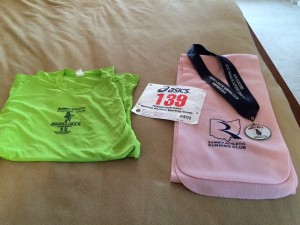 DID I MENTION THE MEDAL??!! 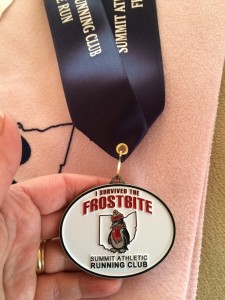 So far so good! Even though I cut the original challenge down by half – from 52 to 26 I am doing pretty well so far on my 2015 Reading Challenge!

Here are the January books that I have read:

1. Category: Became a Movie
Title: Wild, by Cheryl Strayed
Completed: Dec 31, 2014 (close enough to January!)
A great read based on the author’s journey to find herself through backpacking the Pacific Crest Trail after coping with her mother’s death at a young age. A very raw, honest, and emotional account. I saw the movie as well by the same name starring Reese Witherspoon and it was also very good. And, yes after reading this book I did find myself researching a bit about the Pacific Crest Trail. I mean, isn’t there a closeted backpacker in all of us?! 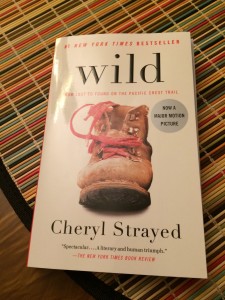 2. Category: A Memoir
Title: My Story, by Elizabeth Smart
Completed: Jan 2, 2015
This is the heartbreaking story of Elizabeth Smart’s kidnapping from her bedroom at age 14 and her 8 month nightmare with her captures in the mountains of Salt Lake City and California. She was found and returned to her home after 8 months in captivity. As a national story a few years ago, I was curious about how she overcame this trauma. The story is awful, but very faith-filled and strangely hopeful. It was not as gritty as Michelle Knight’s story. 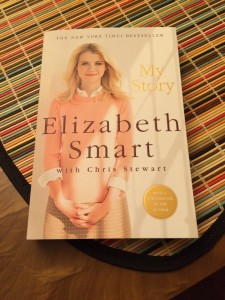 3. Category: One word title
Title: Hatchet, by Gary Paulsen
Completed: Jan 20, 2015
This was a recommendation to me by my son as we looked around Half-Price books with my list of contenders. It is a very good quick young-author read about a 12-year-old boy’s experience being stranded on an island by himself after a plane crash with only a hatchet and the clothes on his back. He grows up in surprising ways and this experience shapes the person he becomes. 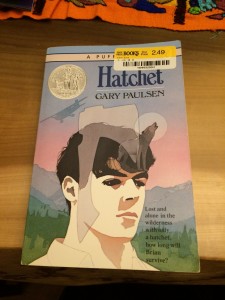 4. Category: Written by a female author
Title: The Silver Star, by Jeannette Walls
Completed: Jan 30, 2015
I really enjoyed Jeanette’s best seller a few years ago- Glass Castles, a true story about her life. However, this one was not as good of a read to me. The story started out good, but there were a few predictable turns and it seemed rushed to a close at the end. I do enjoy her writing, but this was definitely not my favorite. 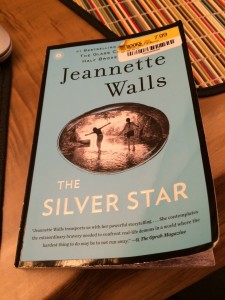