Well today’s race went great! The temp was a balmy 32 this morning with snow flurries, but it was perfect compared to last year’s 17 degrees! I did the 4 miler again and beat my time from last year by almost 2 minutes so that felt pretty good. Plus I just felt good about it. I also ran every day this week so far (M-W) and yesterday outside so I think that was all good prep for today. It was a nice large group – about 800 for the 4 miler and it is just so fun to start off a holiday with a race. It always reminds me of how much I love running in the mornings too! It just doesn’t always work too well in the dark before work!

Here are some fun pics from the race:

This women’s costume was too cool! She said it was her Halloween costume this year – THAT SHE MADE! OMG – not in my “wheel-house” so to speak. So I asked her if I could take her pic! 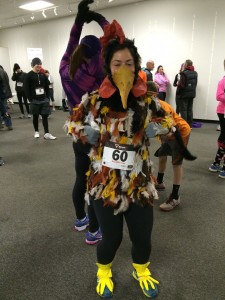 One of the race volunteers wearing a cool turkey hat. I gotta get me one of those for next year! 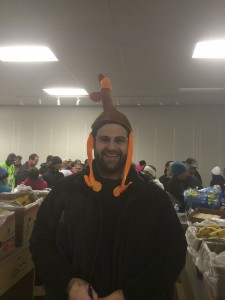 Obligatory finish pic from a kind stranger I befriended! 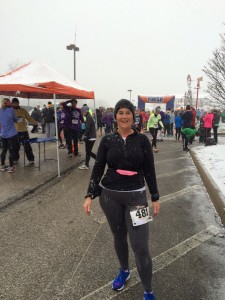 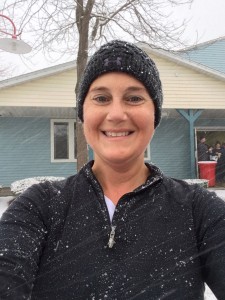 What a fun and different experience! I do enjoy me some chocolate so when I got an email about a “Hot Chocolate Race” in Columbus the same weekend I was planning to be there for a craft show I jumped on it. I’m so glad I did.

The expo was really fun. My mom came with me this time. It was her first time at an race expo so she enjoyed seeing what it was all about. They were giving away pieces of chocolate, marshmallows dipped chocolate, and of course, hot chocolate samples, along with some of the typical vendors you see at Expos. I bought a new Bondiband especially for the occasion. It was pink and said “I *heart* hot chocolate! My mom joined the magnet club by buying one for her car that says, “Walker Girl”! We had a good time walking around, taking it all in and sampling!

Me with the large mug! 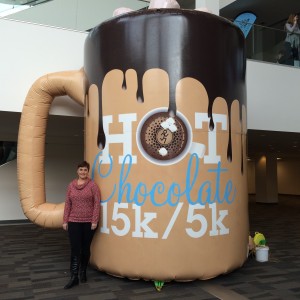 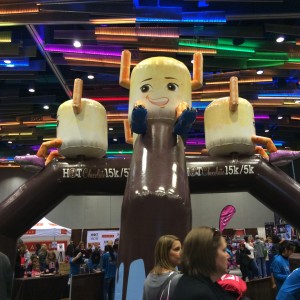 Had to take a pic of this! 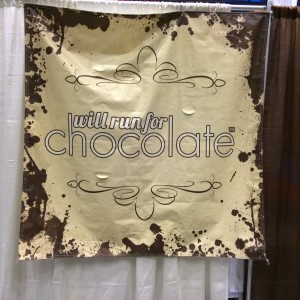 Coming to a city near you! This looks like the email I received promoting the Bling for this race – most excellent sweatshirt and a unique and sweet medal! Hot Chocolate Race director, like you didn’t already have me at the name Hot Chocolate Race, you totally got me with this this bling including chocolate fondue at the finish! 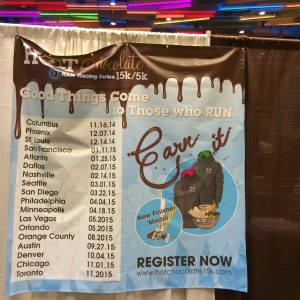 It was another early morning as I had to be down a the race by 6:30am. I got up at 4:45am so I could get ready and grab some breakfast at my sister’s house before heading out at 5:30am. After my bad experience with the parking situation last year for the 1/2 in Columbus I decided to make sure and leave enough time. I had plenty of time – too much time! I was parked and ready to go by 6:40am, but my wave wasn’t scheduled to start until 8:10am and it was very chilly! It was about 29 degrees and it had snowed on my way into the city. I would have just stayed a bit longer in my car, but I really had to go (again) so I suited up and headed out looking for a portapotty.

Waiting in the car… 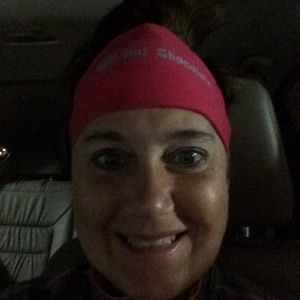 I made it to the portapotty just fine, but for the first time ever someone (a girl) totally opened the door on me. I’m not talking about just tested the door, but full-on door open, I could see the people waiting in line, sort of open. The latch must not have been totally moved over to the red “occupied” sign. Funny thing was, it didn’t really bother me that much! Not sure what that says about me!

I asked someone one to take a picture of me with the marshmallow guy. Hey, anything to make the time go by fast and distract me from how cold I was! I was wearing a short-sleeved tech shirt, a long sleeved tech shirt and another long-sleeved pullover thing. Then a thrift-store sweatshirt and the beloved garbage bag. 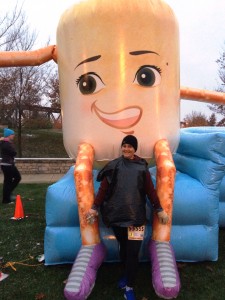 Mr. Marshmallow cheered us on at the start too! 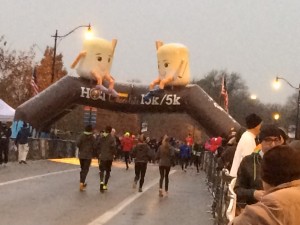 I was feeling like a bit of a loaner waiting all that time. Usually there isn’t more than like 20 minutes to wait in corrals before starting the race so if you are running by yourself it is no big deal, but this race worked a little differently. I looked around for someone in a nearby corral to me. I happened upon a group of women runner friends of varied ages and decided to make friends! I chatted with them for a bit and they wanted to take a selfie with me! They were friends from Cincinnati. They were so nice to let me hang them while waiting for our tern to start. 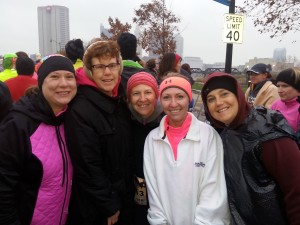 The race itself was great and I felt really strong the entire time. One unique thing they did at the aid stations was give away hot chocolate related items. They still had Gatorade and water, of course, but instead of Gu, they had stations with pieces of chocolate, big marshmallows, tootsie rolls and also chocolate covered marshmallows.

Here I am with my medal! I didn’t even know my time until I checked my watch and that is just a guesstimate. According to my watch my time was 1:39. I didn’t really run by time at all. I just figured I would listen to my body and run according to how I felt and that would serve me well. And it did! No walking except for the water stations. 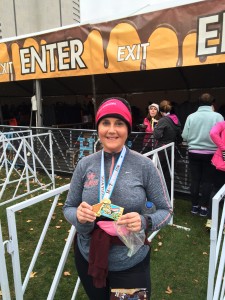 Didn’t I tell you it was “all about that bling”?! 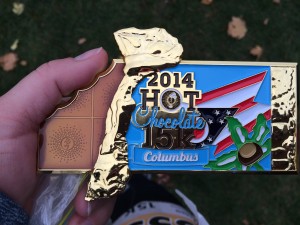 Before I even stretched I headed right towards the signs that read “Finisher mug”. Every finisher received a large plastic mug with multiple compartments. The center compartment was for a steaming hot cup of hot chocolate which was very rich and yummy. A side smaller compartment was filled with thick chocolate fondue and the rest were various items to dip into the fondue (rice krispie treat, waver cookie, mini pretzels, marshmallow and banana. I normally just want a banana after a race, but the marshmallow dipped in the chocolate as well as the banana with the chocolate tasted mighty good! They even provided a wet wipe for the messy chocolate! 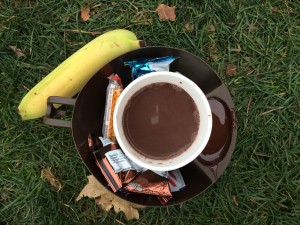 I made some other friends eating my chocolate so we walked over to our cars together. Overall a fun, but cold, experience!

The bling from the race! While we were waiting for our wave to start and freezing we were joking that we could always just do the 5K today rather than the 15! I mean we already had the sweet sweatshirts! But I reminded them that then we wouldn’t get the medal and it is all about the BLING baby!! 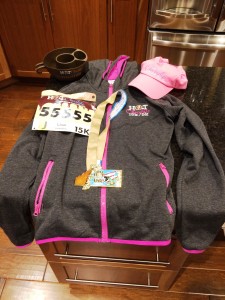