So last weekend was rough. The long run du jour was a 16 miler. I procrastinated and put it off until Sunday morning, per my usual this training season. Saturday night before bed I had all my clothes out, gels packed, watch fully charged. I got up, had my usual breakfast – gluten free bagel with almond butter, some swigs of day old coffee (don’t judge me) and a big glass of water and drove to the towpath trail in Peninsula. It was an overcast morning at 7am and as I pulled into a parking spot I started to feel anxious. It was a mix of feelings really – dread, fear, and general uneasiness thinking about SIXTEEN MILES! All these questions and doubts kept racing through my head about whether or not I was prepared for this run and further, could I even run another marathon??!! What was I thinking?? My training for this race has been spotty, or at least not as regimented as my training in 2011, but I have run this distance before. I trained and successfully ran my first full marathon in Sept 2011 and my training went really well! Well, all except for my 16 mile training run at the towpath!! It was the most humid day (seriously) of that summer and I had not adequately prepped for it (water, gels, etc). I came home sweating through my shoes, crying, and thinking there was no way I could run this race. SO, that memory was gnawing at me a little bit too, as you might guess.

So last Sunday morning I put myself out of my misery (or more accurately into additional misery) and went home. I left telling myself the oh so famous promise, “I’ll just do it tomorrow. It looks like rain anyways.” Since Labor Day was the next day I had bought myself another day/excuse. But the doubts plagued on as I tried to make sense of this anxiety about long runs issue. I sought advice from my Challenger Runner Group on Facebook and got some great advice to try. I also actually googled “long run anxiety” and read some good tips and advice. It was good info and also made me feel good that I wasn’t the only one who had experienced this. I went back to the trail the next day and decided to let go of the 16 mile expectation and just run what felt good. I ran 6 instead. I felt good and strong and had a good run. So I confronted the anxiety enough to conquer the trail that day, but it left me still wondering what to do about the rest of my training and the race in Columbus. Some family and friends suggested dropping down to the half to take the pressure off and then some others (mostly my 12-year-old) said, “no, mom, you should totally still do the full – you can do it! I was so conflicted. I didn’t have the same desire to train and actually DO the race as I had for my first one, but I didn’t want to quit either.

That night as I thought over my options (the half was already sold out I discovered – wah, wah), I suddenly remembered the Run/Walk plan that Coach Jenny had written as one of her many running training plans. The plan involves a 5/1 ratio of running to walking so in other words, you run for 5 minutes, walk for 1 minute, run for 5 minutes, walk for 1 minute and on. What if I tried that method for my long runs to cover more miles and save my legs, etc? My Challenger buddies agreed, as well as Coach Jenny, that that would be a good strategy! She said it was especially a good plan for the heat/humidity and could help with long run anxiety because you are very focused on the present time. Done. That was the new plan! So after a great week of lunch runs with my g-friends I made a new plan for this weekend.

Cut to this morning. I decided to try the 5/1 program. In addition I decided to use another strategy I read about: setting a goal based on time rather than distance. I was used to this for my weekday runs, but it was a new concept for me for long runs. I was a little short on time this morning as I had to get home and get ready for church so I settled on 2 hours – one hour down the trail and one hour back. I wasn’t worried about mileage goals. Off I went! At first I found myself checking my distance against the time and trying to figure out where I should be, but after about 30 minutes in I found it easier to just run. I found running this way very freeing which I think is probably counter-intuitive because you are looking at a watch the whole time, but surprisingly it is quite the opposite. In fact, because I had to keep an eye on my watch I found myself being more in the present moment and did not have time for worrying about how many more miles I needed to go or even how much longer I needed to run. It was simply about completing that 5 minute interval, and then the next and the next. Before I knew it I was at 60 minutes and it was time to turn around. I let myself calculate how many miles I would probably end up getting a couple of times and came up with about 10, but I didn’t fixate on that. Instead I looked around, greeted people, enjoyed seeing two deer up close, and a lily pad area that I swear I have never seen before, even though I have run this same route many times now. 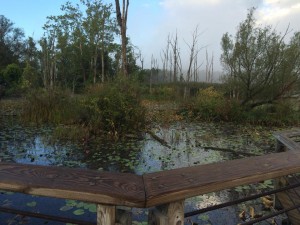 I noticed things along the way. I got out of my head and got rid of the worries about the actual run itself. I was just being the run, right then – in the moment I was relaxed and felt strong and comfortable. On the walking intervals (1 minute after every 5) I didn’t beat myself up about walking like I’ve done so many times before. I didn’t have to walk. Instead this time the walking was part of the plan. This proved to be a huge difference in my mind.

As I finished the run I was pleasantly surprised that I had run 10.76 miles in my 2 hours with a 11:09 pace. Not bad! I wasn’t sure how the walking would affect my pace, but pretty much right on par with where I should be. Hmmm. This was a win all around. And a good reminder about the benefit to “being where your feet are” – at home, at work or on the trail. Now about that marathon in 6 weeks…