The weeks are just flying by and yet again I realized I had not blogged about my training in three weeks! So, in an attempt to catch up, here is a summary of the past three weeks.

Overall training has gone pretty well. I’ve been following my training program pretty well, actually – better than the past even. The one change I’ve made that has seemed to be great is that I’ve pushed my long run to Sunday mornings so I can go to my favorite Sat morning yoga class! It is a win-win! Then, I just adjust my schedule so Monday is my rest day instead of Sunday. So far I’ve only had one long run that was really tough to get my butt in gear and get done – this past weekend. I usually do it early on Sunday morning – get it out of the way before church on Sunday. I planned to do that yesterday too. I got up early so I could eat breakfast and let it digest for awhile before heading out. Well, I’m not sure why, but I was just not feeling it yesterday. I was drinking my coffee, cuddled in a fleece and decided to do it in the afternoon instead. I’m not sure if it is because the weather is cooler now or what (you would think I would like this since I’m a sweaty girl, right?!), but just gave in to the couch, coffee and balancing the checkbook. Hey, at least I was productive, right? So then all morning, I’m preoccupied with this long run. I gotta run 10…I gotta run 10. Ugh. After lunch and waiting a bit I finally just gave myself the lecture that I just need to “do it”. Thank you, Nike. So I begrudgingly laced up, filled up my fuel belt and headed out. The first 3 miles were awful, mostly because of my head. No, I didn’t have a headache…I had a bad attitude! I kept thinking negative thoughts like “I don’t want to do this.” or “I’m going so slow”. Not very positive or motivating thoughts!! But after I seemed to find my groove physically and got the first hill out of the way, I switched my thinking to notice my beautiful surroundings, think about the people on my prayer list, and just be in the moment. I began to plan an alternative second half of my route which was fun and different. That mind over matter stuff is no joke. I finished the run strong and, like always, I was so glad I did it!!

There are a few things learned here. First there is so much truth in that simple message of “just do it”. How many times do we worry and mull something over…analyze and talk ourselves out of doing something hard, or doing the right thing? Or is it just me. I don’t think so. When usually it turns out that thinking about the thing is way worse than just doing…or actually just starting the thing. And how many times do we miss out on an opportunity because we wait? I’m glad I got out there when I did so I could enjoy the afternoon sunshine before it got cloudy later in the day. Second, the power of positive thinking is so powerful. It is not just a good title for a self help book. It is a legit strategy. What we think TOTALLY impacts how we feel and in this case, how we perform. One might think that as a 44-year-old I would have already learned these lessons. And maybe I have. But that is what is so cool about looking at life as a big classroom. There are always opportunities for “do-overs” for us slow-learners and for reinforcing important lessons for those of us who need to be reminded. So next time you start to procrastinate, stop thinking about it and just go for it instead, keeping your eyes open for what is waiting to be revealed to you! 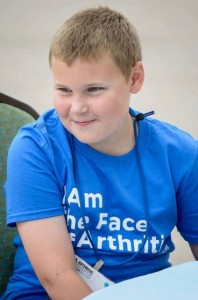 Calling all walkers, runners and friends of the Ram Fam! WE NEED YOU to join our team! Even though it is hot as blazes out there today (and probably tomorrow), we are already thinking about December! Why? I’m glad you asked!!

The Cleveland 2013 Jingle Bell Run/Walk 5K for arthritis is coming up again – this year on Sun, December 8. Last year we were very new to this whole arthritis thing as Zach was diagnosed in October of last year, but we jumped right in and formed a team to walk/run and raised about $2000 thanks to so many friends, family and colleagues. We were already planning to form a team again this year, the Ram Fam sequel, if you will, and raise our fundraising goal, when something wonderful happened. Following our participation in the JA Conference this summer I was contacted by staff from the Arthritis Foundation who wanted to meet with me and take me up on my offer to get more involved. I have to share that Zach was annoyed and a little jealous about the fact that I was invited to lunch and he wasn’t.

He said, “It’s not fair! Why is it that I get arthritis and you are the one getting famous!”

Little did he know how wrong he was!! It turns out that the Arthritis Foundation wanted to offer Zachary the “position” of Child Honoree for the race this year! I learned that the job description (there really is one!) consists of Zach being able to tell his story and become the “face of the race” this year, including personal interviews, public appearances, and possibly radio and television spots! I knew even before leaving my lunch conversation that Zachary would be totally into this! Exhibit A: he loved doing TV camp last summer; Exhibit B: his comment about me “getting famous”!

So cut to today and how you can get involved!! There are a number of ways to get involved:
1. Join our team!!! We are looking for at least 10 people to join the Ram Fam! We are asking for each team member to commit to raising $100 for arthritis which will go towards our team goal. We would love for you to walk/run with us on Dec 8, but if you cannot for whatever reason, please join our team anyway! Click here to join our team!
2. Walk with us!!! If you would like to commit to being a walker/runner and participate in the actual event on Dec 8 you can do that too or only! Click here to register for the race!
3. Make a donation! Not a walker or runner? You can simply make a donation to help us reach our team goal of $4000 this year. Click here to make a donation!

We will keep you posted as we learn more about the Child Honoree program and get more involved in this year’s Jingle Bell Run. In the meantime, thank you in advance for your support! Arthritis is unacceptable! Help us take a stand and work towards a cure!!!

Not exactly an inspirational poem, but for some reason it really speaks to me.

So You Want to Be a Writer
By Charles Bukowski

if you first have to read it to your wife
or your girlfriend or your boyfriend
or your parents or to anybody at all,
you’re not ready.

don’t be like so many writers,
don’t be like so many thousands of
people who call themselves writers,
don’t be dull and boring and
pretentious, don’t be consumed with self-
love.
the libraries of the world have
yawned themselves to
sleep
over your kind.
don’t add to that.
don’t do it.
unless it comes out of
your soul like a rocket,
unless being still would
drive you to madness or
suicide or murder,
don’t do it.
unless the sun inside you is
burning your gut,
don’t do it.

when it is truly time,
and if you have been chosen,
it will do it by
itself and it will keep on doing it
until you die or it dies in you.

there is no other way.

and there never was.

Yikes I’m behind in my blogging!  I just noticed that I only have one entry for August! Oh well! I need to carve out some time and start making a list of things I want to write about. I usually think of things while driving, but if I don’t write it down – poof – it is gone!

Anyways, so an update on my training for the Columbus half. Things are going pretty good actually. I just finished week 5 yesterday! I have run an average of 2 runs during the week (3 in week 4) and then done my long run on the weekend…7, 5 and then 8 yesterday. And at least 2 cross train days of yoga. My leg issues have gotten better. Yesterday I felt really strong and wasn’t bothered by my leg at all (just the humidity, oye!). I used my fuel belt for the first time in about a year yesterday and I’m glad I did. One sip per mile after mile 4 and then gulped the rest cooling down. I did notice that my energy lagged during the last mile. I probably should have had some runner gummies with me, but I got through it. I had to sit a minute before taking a shower. I felt off – not dizzy really, but my eyes could not really focus. That has only happened one other time before – during a lunchtime run when it was really humid and I had run really fast with the girls. After a took a minute and just chilled out I was okay. More water please!!!!

I think the key to my leg feeling better is the trigger point massage! I’m going to keep going to my massage therapist every other week until the race. Well, yoga helps too, of course! I’m so glad I went to Amy’s power class on Saturday. I was supposed to do my long run, but I just really wanted to go to yoga as I’ve missed that one for a few weeks now. So it was a win-win – I did both!! Who needs a rest day?!

Then just when I thought today would just be a yoga class in the morning and then a rest day full of laundry and getting caught up, Zach signs us up for the Taste of Hudson Fun Run this morning at 8:30 am! I agreed to run with him, but not the 5K…just the mile. I think I can handle that! Plus, he would not be ready to run a 5K on the fly anyways. Hey, I can’t turn my kid down when he wants to do something active!! Bring it on!! 🙂