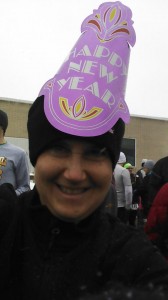 Well, I finally got a snowy Great New Year’s Eve Race this year! It was calm all day, but then it started lightly snowing on my way to Stow. By the time we started it was a little more serious and then by the middle of it it was coming down pretty good! It was actually pretty fun to run in the snow. I am such a fair weather runner that I really have not done many runs in the snow like that. 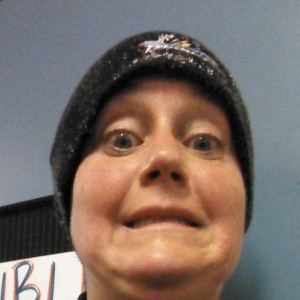 It takes 1300 of my closest friends to motivate me! It was not too slippery or slushy. The biggest challenge was getting back to the car after the race! I was running late so I did not get a parking spot in the Stow High School lot so I had to park a little bit away at a child care facility. The run there was a good warm up, but the way back was a snowy, chilly since I was now sweaty, run! The run was pretty good. I did walk a bit on the hills, but I felt like it was pretty good for not running for a couple of weeks.

The official time is already up on the website. My time was 33:08 and of the 99 women in my age group I came in a #41 which is good (faster half!). I saw a few costumes, but not as many as other years, probably because of the weather. I remember a couple of years ago it was 50 degrees for this race. Only in Cleveland my friends, only in Cleveland!

What a great event! The Jingle Bell Run 5K Run/Walk for the Arthritis Foundation was awesome! What a fun morning! The morning for me began rather early – right around 4am – up coughing with yet another cold! I had been determined to try to PR for this race – for my Zachary B! However, after a shorter night’s sleep than planned and not feeling quite up to par I decided that we would run together instead! Originally Mike had said he would walk it, but then he decided to run/walk instead so we met in the middle. My friend, Angie and her friend Ann joined our team soon after we started promoting it! I call them the “Ram Fam on the ground” since they were actually going to be participating in the run itself. The other 35 people who gave generously to the run are the silent supporters, but still a part of the Ram Fam team for sure. I’ll get to them later!

We headed to Legacy this am happy that it was fairly mild outside and just a little misty. I grabbed a quick family photo with the elf guy! Afterall he was the mascot on the website so he was famous!! 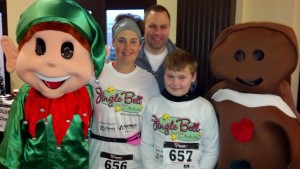 There was nice energy happening at the registration area – tons of Christmas red and green, costumes, and of course, jingle bells! We grabbed another pic in front of the Christmas Tree. 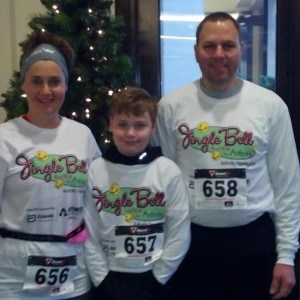 We finally met up with the rest of our team and got prepared in our jingle bell run hats that Angie made! She even made one labeled “captain” for Zachy (the status of which he reminded us of quite often!) 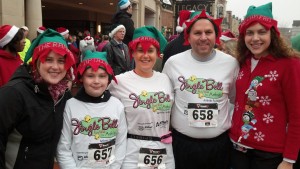 Close-ups of the hats because they are totally awesome (and before Henry decides that they are awesome too!) 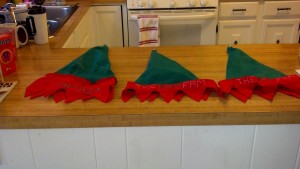 We agreed to run together and took off when the horn blew! We all stayed together and ran for the first mile and I was really proud of Zach and Mike! Neither one of them run at all and they did great! Then we walked a bit and then took off again. By the half-way point Angie and I were ready to take off a bit. Mike and Zach said to go on ahead so we did! Ang and I came in around 35:20, but for once I really did not care about time. I just wanted to get into position to take pictures of Zach and Mike coming into the finish! I took a video of them coming in. Check it out here! (coming soon)

Here they are after a quick water break! 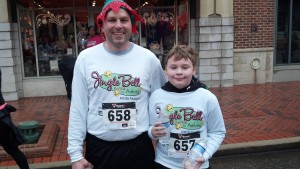 And a silly one of me and my dude! 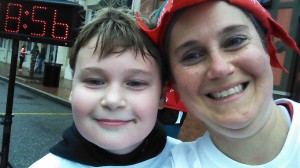 Here is a posed pic of the team by the finish. Pay no attention to the clock – we had waited around a bit! 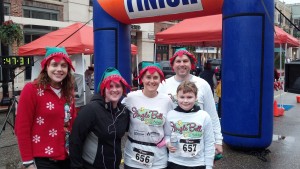 As I mentioned there were a number of crazy costumes there. Here were the winners of the team costumes! You gotta have tutus at every race!! 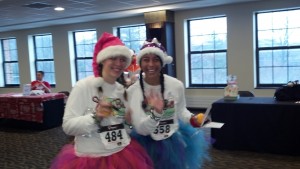 This lady won first place in individual costume! She also placed in her age group which was over 70, I think. She was cool!! 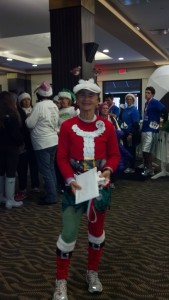 After they went through all the running awards in all the age-groups they announced fundraising goals. They did not mention the top three team names which I thought was odd, especially since the Ram Fam came in 2nd!! But that was okay because then they announced the top individual fundraisers and first place was Mike Ramsey!!!! Yahoo!!! 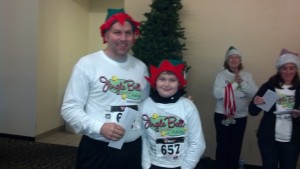 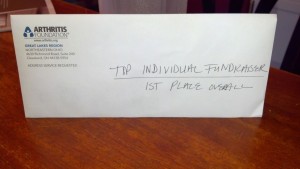 The prize was 4 tickets to an event at the Q in January and $100 to Dick’s Sporting Goods! So cool! Wish we could share it with the whole team! 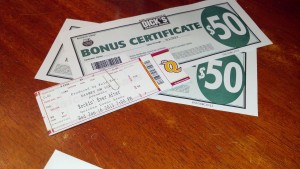 Speaking of the whole team, as many of you know we have been working on fundraising for the Arthritis Foundation for this event for about a month now with much success! Happily we surpassed our initial goal of $2000!!! We are so grateful to all of the people who contributed to this great organization. You are all amazing! Here is our tribute and applause for the Ram Fam Honor Roll:

Thank you all and God Bless!!!

So we took Zach for his first visit to the occupational therapist today. Initially we had hoped and thought we would be able to do the therapy in Hudson, but when I called to make the appointment the earliest availability was not until the end of January! But we could get in at Akron Children’s the same week so I grabbed it! We were just there last Wednesday so I’m feeling like we are almsot starting to live there! We continue to be so impressed by all the doctors and staff that we interact with at Akron!

As this was my first experience with this sort of thing I did not know what to expect. I even had no idea what the difference between occupational therapy and physical therapy was.

A very nice young woman named Sarah came out to greet us in the waiting room and led us back to a homey room. It was actually a large area designed to simulate a home situation with a kitchen, table, chairs and couch. I understand that it is helpful for people who doing therapy to help them with things around the house if they are actually in a home environment, but it was also relaxing for us too! Once again Sarah, the therapist, addressed her questions directly to Zach, which is how it should be, but I always catch myself wanting to answer for him, but he does just fine by himself. She started with general questions about his wrist to clarify Zach’s first response of “my wrist is messed up.” She asked some good clarifying questions about what daily tasks are challenging for him, etc. Then she did some testing with various instruments. She measured the angles of his wrists, thumb on both hands. Then she did a strength test for both hands. Zach had to squeeze this instrument as hard as he could until it hurt and then stop and report the level of pain (1-10). The left one measured a 45 in terms of strength and the right one only measure a 10. Then she did a finger strength test with a different instrument. His right fingers were about 5-6 pounds off of the left one.

After the tests were completed she talked about things Zach should do at home.
1. Ice – she said to ice the wrist just until it feels numb and the skin is pink. She suggested doing it before homework or before any activity that he will need to use his wrist. She also suggested icing after activity like TKD when he has used it a lot. She told us NOT to use heat at this point.
2. She put kinesio tape (two big X’s) on the top and bottom of his wrist and explained that this should help by lifting the skin and create more space in the joint and also it can act like compression too for support. She said it should last about 2 – 3 days. (BTW – he took it off at school later that day already saying it bothered him!)
3. She showed Zach 4 different exercises to do at home. He is to do them 2-3 times a day only until it hurts and then stop. The goal is to get to 15 reps of each of them. One is to move the hand back, forward, middle. The second is to move it side to side like waving. The third is to bend hand into a fist and then open. The last one is to touch the thumb to each finger.

She had a couple of suggestions for school:
1. Fatter writing implements work better than skinny ones and gel pens might actually work better than pencils since you don’t have to press down as hard. She said we might want to get permission from the teacher to use these.
2. She suggested mentioning to the teacher that Zach might need to take breaks during long writing assignments. She said she could provide paperwork for the school if that would help. I was very appreciative of that because I’m not sure the school really takes it seriously. I have a feeling the whole “it is only arthritis” thing might creep up, although to be fair I have not yet experienced that. Plus, what kid doesn’t get tired from writing at school?! It might just seem like a normal complaint.

Sarah mentioned that since Zach’s arthritis is pretty acute right now (yikes) she recommends therapy once a week. I immediately was concerned about this in terms of Zach missing more school, especially since it is more of a drive than Hudson, but she said she would be able to do like a 4:15pm or 4:30pm so Mike could just pick him up from school to take him. Overall I was very impressed with our visit and with the staff. We even had a visit from “Tank”, a therapy dog who was working with a little girl, and Zach got to give him a cookie after doing his commands! On our way out, as we passed some other children, who had much greater physical concerns than Zachary, doing therapy (walking) in the hallway, I wondered what their stories were and said a prayer for their families and then my own gratitude prayer for all of our blessings too.