So we dropped off the doggie and Zachary and headed south at about 2pm. We headed right for the Expo to pick up my bib, shirt, bag and other items. The Expo is one of my favorite parts of race weekends, but I have to say I was a bit disappointed in Pittsburgh’s. They had the usual suspects like shoe vendors, Glide vendors and assorted GU’s, but the shirts were really lacking. I liked the giveaway shirts, however. Here is what they look like. But they are long sleeved and I wanted a short sleeved one. 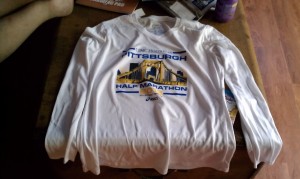 But the other Pittsburgh shirts for women, at least, were not that great. I loved a couple of the men’s shirts, but of course they were out of men’s smalls so I bought a black tank that is pretty cool. So yeah, it is apparently all about the shirts for me at the Expo! There were a few random booths there like “Gutter Helmet”, a remodeling contractor and an animal rescue organization. We met our first porcupine at that booth. 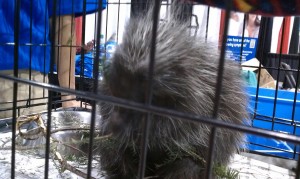 I’m not sure why some of those booths are at a runner’s expo, but hey, the more the merrier!!

They did have a really cool display of all the runner’s names on a big marble thing – think Vietnam memorial. It spelled out something with the word RUN in it, but I can’t remember what it said. I took a picture of my name after I found it. My name is in the center in the dark colored part of the letter. 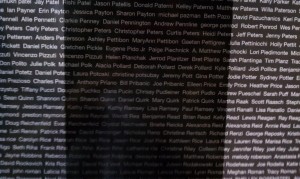 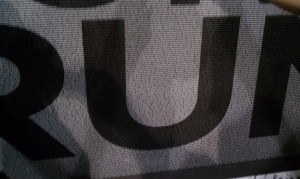 After an hour we had had enough and so we went to check into the hotel.

We stayed at the Priory Hotel, which was a former parsonage for St. Mary’s Catholic Church. 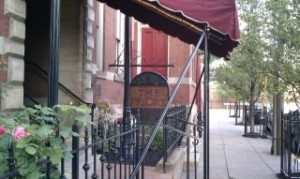 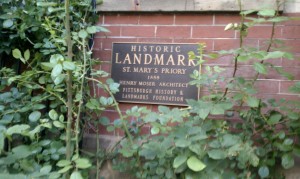 It was really cool and our room was amazing! 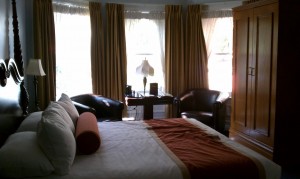 We got settled and met up with our friends to figure out dinner. They had already eaten so they helped us find a place we could walk to for pasta. We walked about 1/2 mile to a place called Legends of the North Shore. We had great service, but just okay tasting food. But it did the job, however! It sure did look good though! 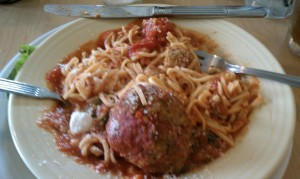 My spags and giant meatball 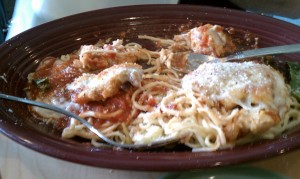 We headed back to the room, and settled in to watch a movie. I got all my stuff out and ready to go for an early morning. I think I fell asleep about 10pm…wake up call was for 5am…ZZZZZZZ