So I was supposed to do 4 miles with 6x(2 min at 8:45/mile + 2 min rest). Well, I changed my goal midstream. I did 4 times with that interval. Then I decided I wanted to just do 3 miles instead plus I noticed I had a fair shot of getting it in well under 30 min. So, at about 26 minutes I kept increasing my pace until I finished at 29:55!! And that is treadmill time so I know it is accurate!! It felt good. I’ve been feeling fat and unmotivated lately so I needed a good result today.

Next up – free yoga at 6am at yoga lounge. I would like to try to get a run in too at some point, but I have a potluck at lunch…hmmm…..

So I expected to find my normal instructor at class today and was excited to get my typical great workout. But there was a different woman there that I had never had before. I was instantly irked. So when she asked us to set our intention for the practice today I thought about accepting change. I wanted to embrace this attitude for the class and for my day too. I get so used to things as typical, as usual. I get used to the structure and the normal flow of my life, but when things change it can be stressful and throw us off kilter. So I kept my intention throughout the class and was able to get a great workout and accept the practice for what it was that day. It was different, but good.

Well, today I felt like I paid for the fact that I didn’t run this weekend!! It was rough! I ran the first two miles at 5.7 (10:32) with an incline of 0.5 and I thought I was going to die!!! I took off the incline after mile 2 and I put it down to 5.5 at mile 3. It still felt really fast. I usually have been increasing my speed the further I go in my run, but today I did the opposite. I’m not sure if that is because like I said I didn’t run this weekend or what! The other variable is treadmill. I used a different one than I usually use today. It is the same brand, but a different machine. I have no idea if that can make a difference or not. My one runner friend did tell me that some of the belts are tighter – not sure exactly what that means. Anyways, I did the whole 5 miles so that was still a win for me!

Next up tomorrow – 6am yoga as I have a lunch conflict at work tomorrow. Yay!!

Life is stranger (and funnier than fiction). That is so true.

Take the case of green puppy for example.

I should explain who green puppy is. Green puppy known by that very descriptive and creative name is Zach’s very favorite stuffed friend. He received him as a gift when he was born along with many other stuffed friends, but for whatever reason green puppy stood out as the fave from day 1. I have pictures of Zach sleeping with him as just a little guy. Green puppy fits in his arm just so that Zach is able to carry him around like an extra appendage and still do other things with both hands. Needless to say green puppy has an elevated place in the Ramsey family pecking order of stuffed friends. This is important background information for the reader to know before I tell you that he had a very close encounter with the large canine in our house a few weeks ago. As I have shared Henry has a taste for stuffed animals for reasons that we still have not yet uncovered. (We are saving up for doggie therapy). Well, green puppy barely escaped with his life with one eye and some innards removed. All I remember hearing that day was, “Nooooooooo, not GREEN PUPPY!!!!!!!!” and then finding this… 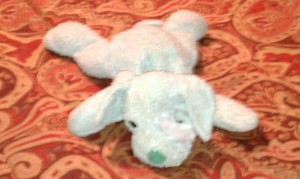 Zach did not want me to write about this incident at the time it happened. As I was taking this picture to blog about the incident, Zach kept saying, “It is not funny!” I agreed that it was not funny. To that he responded, “but you are going to make it funny!” We quarantined his remains and I promised Zach that a) I would not blog about it (at least not then) and b) we would fix him (read: hopefully grandma could fix him since mommy doesn’t sew). So finally I remembered to ask grandma to help perform surgery on green puppy a few days ago. He was safely delivered to grandma in a Heinen’s bag. Just as we had hoped and prayed grandma was able to successfully perform surgery on him, provide him with a new prosthetic eye, additional stuffing and a bath to boot. Green puppy was healed! Hallelujah! Here he is in all his fixed glory! 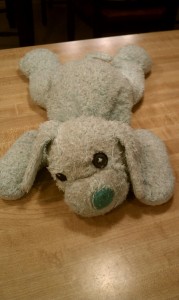 All is well.
Well, almost.

As grandma was telling me yesterday that she delivered a fixed green puppy back to our house, a seed of worry began to grow in my tummy.

“Just on the counter in the kitchen”, she said naively.

Gulp. Oh, no, not the kitchen counter, I thought! The kitchen counter: the serving table for Henry’s every whim or insatiable appetite. Thankfully I arrived home to find green puppy safely in his Heinen’s bag on the kitchen counter. Whew! I went upstairs for about 5 minutes to grab some laundry and came down to find the Heinen’s bag missing from the counter!!! Zach and Mike had just arrived home so we all began frantically looking for green puppy. The Heinen’s bag was chewed almost beyond recognition all along the basement stairs. We were filled with dread as we went downstairs just knowing we might not be ready for what we might find. But we couldn’t find him anywhere. No green puppy! We broadened our search to include the entire house, but I started to accept the unthinkable. Henry has just eaten green puppy, like completely! New prosthetic eye and all!! Just as we were at our wits end and beginning the grief process, and Zach was ready to beat the dog, Mike proclaimed his find. Green puppy was behind the couch in the basement, unscathed and in one piece!!!!!!!! Yes, Virginia, there is a Santa Claus!!!!! The only conclusion we could draw from this narrow escape is that in his violent shaking of his prey, Henry must have flung his victim behind the couch and then could not retrieve him to finish the job. Praise God!

Green Puppy is currently residing in a safe house while his hermetically sealed protective case is being designed and prepared. Contributions to Henry’s therapy fund can be made at the following website: www.mydogiscrazy.org.

Good run at lunch today. Just made it 3 as I had a lunch meeting to attend at 1pm. I ran the first 2 miles at a pace of 5.7 (10:32 pace) and the last one at 6.0 (10/pace) because the girl next to me was going 6.0 and I had to do the same as her. Man, I’m glad she wasn’t running an 8-minute mile! (No, I would not/could not do that!!!). I was cracking up today because all of the treadmills (maybe about 5 of them in a row) were all full at one point and all I could picture was an image of either George Jetson (didn’t he run on a treadmill?) or Fred Flinstone (Jane, stop this crazy thing!). I also felt like we were all hamsters on our exercise wheels in a giant’s world. These are the things I think about on the treadmill I guess. Strange, I know. Anyway, onward to the Winter Formal dance tonight, feeling confident in my new dress. And yes, for those keeping track, I did miss a yoga workout yesterday. In order to buy said dress. It’s all good.

Next up tomorrow: run in the morning followed by a hair appointment and a luncheon with my mom. All good things!