We had a great Memorial Day today. We started out going to the Memorial Day Parade in Hudson – such a cute parade. Zach wanted to be in the parade so we dropped him off at our church float which was actually a boat! 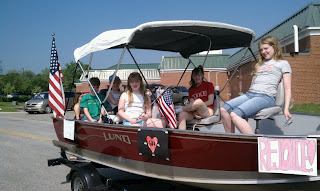 Then Mike, Henry (6 month old puppy dog) and I took our usual place right outside of Bruegger’s bagels. 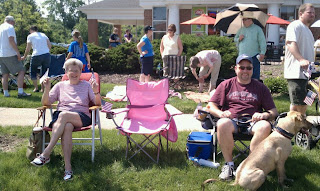 Henry was a good boy with the people and the dogs while we were waiting for the parade the start. Then as the Hudson High School band started Henry was not pleased. Let’s just say Henry does not agree with “Loud is Good”. He was sort of done with the parade after he was spooked by the band. So after the parade he relaxed in the air conditioning while we enjoyed the annual picnic at our Pastor’s house. Good time as always with great food and great fellowship…and a nice, cold, adult beverage! It was just so nice to talk and relax even if it was hot. We enjoyed riding in the Jeep with the top down.

I was hoping that since we stayed for a good part of the afternoon at the picnic, that I might get a reprieve for going to the pool this afternoon. But, nope, Zach still very much wanted to go…so we put our suits on our very white bodies, slathered on the sunscreen and headed out for a couple hours. First pool day was a hit – hot, but good. 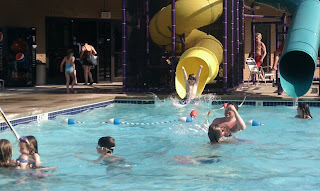 Great family day. Now, it is about 8pm and I’m almost ready for bed!!