Okay, week one, workout one – check!! It felt pretty good, once I shook the rust off of my legs. It was a beautiful morning, about 64 degrees and pretty humid, but I enjoyed all the different smells outside – especially the honeysuckle. I did my normal downtown route and saw people getting their chairs out ready for the parade – at like 7:30am, a little bit early for my tastes, but hey, good for them. The normal parking side of main street was blocked off by cones so I took a cue from another runner and ran on the street – very cool – felt like my own race track.

So, in honor of my post title here is a picture of my running shoes… 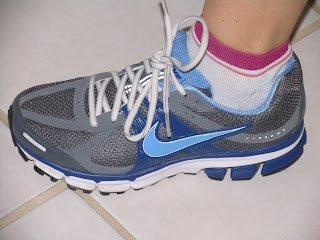 They are Nike Pegasus, size 6 1/2. Normally I wear size 6, but when I was fitted they told me to go up a size for running shoes. I have another pair exactly like them, plus three or four other older pair that I just can’t get rid of. The newest of the older pairs I use for cross training stuff, but the blue babies are only for running. The other pairs I use for random things, but I should probably ditch them. I alternate pairs of my current ones and I keep track of how many miles I put on each – they are marked with a #1 or #2 on the sides of them. Yes, I am structured, but it works for me!

I have had great experience with these shoes. I got my first pair at Second Sole in summer of 2009 where the woman “prescribed” them for me by looking at my old, clunky New Balance cross trainers that I reluctanly brought in to show her. She looked at the soles and said something about the way I “pronate” (still not exactly sure what that means, but it something to do with the way my foot moves), but she said I have the type of foot that is not prone to injury. That I remember! So, I’ve stuck with them. I didn’t know it at the time, but they also have a cool little spot in the sole that holds the chip for the Nike tracking thing that is compatible with the iPod. I’ve had a love-hate relationship with my iPod nano ever since. 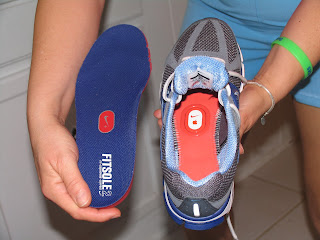 Anyways, these kicks have served me well. I read all about those webbed/toe ones and other fancy varieties in running magazines, but hey, if it ain’t broke, don’t fix it, right?! I see another new couple of pair in my future – probably around mid July. Those will be my marathon race pair (gulp). There I said it!